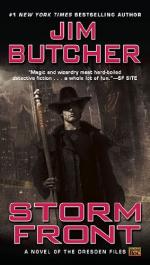 Jim Butcher
This Study Guide consists of approximately 40 pages of chapter summaries, quotes, character analysis, themes, and more - everything you need to sharpen your knowledge of Storm Front.

This detailed literature summary also contains Topics for Discussion and a Free Quiz on Storm Front by Jim Butcher.

Storm Front by Jim Butcher is his debut novel of the Dresden Files. Someone in modern day Chicago is practicing magic—really bad magic that is killing people by ripping their hearts out using the power of electrical storms. Furthermore, they are making a drug called ThreeEye that is highly addictive and gives the user the dubious pleasure of being able to see like a wizard. Harry Dresden is a real wizard and he is not very happy that someone out there is giving wizards a bad name. Lieutenant Karrin Murphy, homicide detective in charge of Special Investigations, calls on Harry as a friend and as a wizard because she can tell that the homicides cannot have been caused by anything in the normal world. Harry agrees to help because Karrin is his friend. He also needs the money.

Harry believes that using his power as a wizard for good will help him to clear his name with the White Council, the governing entity over all things magical. Because Harry once killed a man with magic in self defense, the White Council has placed the Doom of Damocles over his head. If Harry ever gets caught violating one of the Seven Laws of Magic, he will be sentenced to instantaneous execution by sword. Because Harry wants to clear his name with the White Council, he has to be very, very careful in how he tries to track down the killer who is using bad magic because Dresden will have to experiment with dubious magic in order to unveil him.

About the same time Harry is hired by the police department to help solve the double homicide, he gets a missing persons case. Monica Sells comes to Harry for help in finding her missing husband, Victor. This is not his favorite type of case, but money is money, and Dresden figures it will be a pretty simple case to solve. At first Harry believes that he has discovered that Victor was having a really bad case of male menopause, and having lost his job was drowning his sorrows in orgies at his lake house. Soon, however, Dresden realizes that Victor is connected to the homicide cases he is working on. What he just can't seem to figure out is what the connection means.

In the meantime, Dresden tangles with Johnny Marcone, Chicago's crime boss. Marcone tries to bribe Harry to sit by and do nothing to help Lieutenant Murphy. Harry knows that it is probably not good business to offend the city's highest ranking mobster, but his word to Karrin means more to him, so he refuses. Harry might be struggling for money, but he does have a code of honor that he lives by. Dresden is also curious at Marcone's request because one of the victims of the original double homicide was Marcone's body guard. There is much more to this case than meets the eye, and Dresden is nothing if not very curious.

As if Harry does not have enough trouble on his plate with the warden of the White Council breathing down his neck, a police lieutenant friend demanding answers, and a killer using magic to kill people, life is further complicated by the femme fatale reporter for Chicago's paranormal magazine, and a vampiress Madame from the Velvet Room Escort Service.

Harry must work within the constraints of both the law of his world, and the law of Nevernever, the world of magic. In order to solve the case, Dresden bends the rules of both worlds in order to keep his word, maintain his integrity, and reach the killer before the killer reaches him. In a world where normality meets magic, Dresden fights demons, battles scorpions the size of a small dog, and faces a powerful evil wizard intent on killing him. In the end, Harry manages to defeat the would-be wizard at his own game, but not before more people die or are injured in the line of duty during the investigation. It is really hard convincing people you are really a good guy when the world seems to be overpopulated with bad ones.

More summaries and resources for teaching or studying Storm Front.