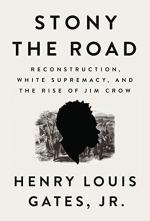 The following version of this book was used to create this study guide: Gates, Jr., Henry. Stony the Road. New York: Penguin Press, 2019.

In Stony the Road, Henry Gates Jr. presents a linear historical narrative taking place between the Reconstruction Era (1861-1873) and the Harlem Renaissance. In between these two eras was the period known as Redemption, in which white supremacist lawmakers, writers, artists, and other cultural figures attempted to roll back the gains made by African Americans after the Civil War. Throughout the text, Gates includes examples of Sambo art—racist depictions of black people in popular culture including postcards, advertisements, political cartoons, and other media.

Gates begins by discussing these gains, which included the passage of the 13th, 14th, and 15th Amendments. These Amendments outlawed slavery and granted African Americans citizenship and voting rights. The newly freed slaves rushed to take part in the political process, and even entered government in record numbers (an estimated 2,000 black men served in office during Reconstruction and Redemption). But these new rights were curtailed by judicial rulings like Plessy v. Ferguson, which upheld segregation, and by a spate of lynchings across the South meant to intimidate black voters away from the polls.

Furthermore, journalists, scientists, and religious leaders circulated discourse arguing that African Americans were inherently inferior to whites, or perhaps were not even fully human. Black people were compared to monkeys and considered less evolved in terms of intelligence and moral character. Meanwhile, in the 1870s-1890s, plantation literature gained in popularity. Stereotypical black characters in this literature, like Uncle Remus, were depicted as longing to return to the bonds of slavery. In 1905, Thomas Dixon published The Clansman: An Historical Romance of the Ku Klux Klan, a virulently racist tome that would serve as the basis for D.W. Griffith's film The Birth of a Nation. Meanwhile, African American leaders and thinkers argued that new leadership was needed in the black community to help combat these stereotypes.

The proliferation of Sambo art reached a fever pitch in the 1890s-1910s, amid fears of miscegenation and the rise of the stereotype of the black man as a rapist. Because of these images and the invented threat of sexual violence, the number of lynchings across the South exploded (approximately 3,000 lynchings took place between 1889-1918). In 1915, The Birth of a Nation was released, and screened in the White House by President Woodrow Wilson. The film depicts, among other racist horrors, a former slave attempting to rape a white woman, and the vigilante justice (lynching) meted out at the hands of the Ku Klux Klan.

At this point in history, black leaders began more vehemently pushing the narrative of a new archetype in the black community, often referred to as the “New Negro” (187). This archetype was educated, talented, religious, and morally upright. The New Negro figure corresponded with the Great Migration, a mass exodus of African Americans from the Southern states. Many of these migrants ended up in the Harlem neighborhood of New York City, which went from 10% black in 1910 to 70% between 1920-1930. Figures like W.E.B. Du Bois (who had been an established black thinker and leader since the late 19th century and co-founded the NAACP in 1909), Alain Locke, and the more politically radical Hubert Harrison gained widespread attention and acclaim during this period. Literature was an integral part of the movement, cemented by Locke's publication of The New Negro anthology in 1925, which featured work from Du Bois, Langston Hughes, Zora Neale Hurston, James Weldon Johnson, and many more talented black writers.

Gates notes that jazz was also a fundamental part of the Harlem Renaissance, though the music was disparaged by Alain Locke and others who believed it was too coarse and did not correspond well to their intellectual and cultural agenda. Gates states that criticism of the New Negro archetype for being elitist and leaving behind working-class African Americans was common. In the epilogue, Gates explains that the advancement of the black race was accomplished through the dual channels of artistic and literary endeavors and direct political action, and that Du Bois' establishment of the NAACP paved the way for the Civil Rights movement. Gates closes with the statement that awareness of the history of racism in America allows us to be more mindful and vigilant against white supremacist ideology as it creeps back into the national discourse.