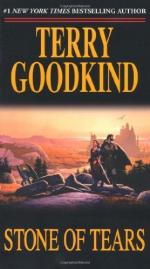 Terry Goodkind
This Study Guide consists of approximately 42 pages of chapter summaries, quotes, character analysis, themes, and more - everything you need to sharpen your knowledge of Stone of Tears.

This detailed literature summary also contains Topics for Discussion and a Free Quiz on Stone of Tears by Terry Goodkind.

Stone of Tears, by Terry Goodkind, follows a group of characters as each do their part to stop the Keeper, the ruler of the underworld, from escaping into the world of the living. Richard Rahl is a wizard that the prophecies have told about for thousands of years. Richard alone has the power to fix the veil that has been torn and stop the Keeper from destroying all life on earth.

Richard is in a faraway village with his intended wife Kahlan. Kahlan is the Mother Confessor, a sorceress who can take over a person's mind with a single touch. Richard has begun to have head aches and soon is visited by three women who call themselves the Sisters of the Light. They tell Richard that he must come with them or the head aches will kill him. The head aches are Richard's magic that has recently begun to surface in Richard. He refuses to go with them, but Kahlan fears he will die and tells him that if he loves her he will go.

Richard leaves the Palace of the profits to face the agent that wishes to free the Keeper and finds Rachel and retrieves the Stone of Tears from her. The agent, Darken Rahl, tells Richard that Kahlan is to be beheaded, but Darken Rahl will save Kahlan if Richard will help to free the Keeper. Richard loves Kahlan but can't imagine sentencing the entire world to death for her. Richard is able to defeat Darken Rahl and replaces the Stone of Tears on the Keeper's prison. Richard quickly starts the long journey to the kingdom where Kahlan is to be beheaded.

Richard finds a man selling pieces of Kahlan's hair in the street as she is the last Mother Confessor. Richard kills the council that supposedly puts her to death but is visited by a spirit who tells him that Kahlan is still alive. The people were deceived into thinking she had died by a vision that Zedd had created.

More summaries and resources for teaching or studying Stone of Tears.