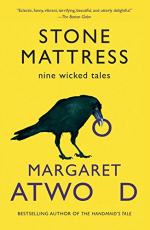 Margaret Atwood
This Study Guide consists of approximately 40 pages of chapter summaries, quotes, character analysis, themes, and more - everything you need to sharpen your knowledge of Stone Mattress.

“Stone Mattress: Nine Wicked Tales” is a collection of nine short stories by Margaret Atwood. The stories nearly all occur in the contemporary world, and all have many themes in common with one another, including aging, death, horror, the past, and the duality of fantasy and reality. The first three stories of the collection – “Alphinland”, “Revenant”, and “Dark Lady” – form a trilogy of sorts, revolving around the same characters over a period of several years. In “Alphinland”, Constance Starr, author of the famous Alphinland fantasy series, has difficulty distinguished reality from the fantasy of her novels, and distinguishing the present from the past as she imagines her recently deceased husband, Ewan, is still with her. This causes her to reflect on the past, and a relationship with the cruel poet, Gavin.

In “Revenant”, the aged Gavin – who has married a very young, stunningly beautiful woman named Reynolds – prepares for an interview with a graduate student that his wife has arranged. Naveena, the student, wants to interview Gavin about his poetry, specifically about his decades-past relationship with Constance. This annoys Gavin, because he hates delving into the past and because he has long wondered what would have happened if he had stayed with Constance. Gavin becomes upset, and following a nap, trips, falls and suffers a fatal heart attack. In “Dark Lady”, Jorrie, a girl who once dated Gavin and served as a muse, attends his funeral. There, she makes peace with Constance while a delighted Naveena looks on. Jorrie and Constance have long blamed one another for their not ending up with Gavin.

In “Lusus Naturae”, a girl with a genetic and mental condition – where hair forms all over her body and she behaves like a cat – is seen as an embarrassment to everyone in her family, except her father who insists she is a human being. The family decides that, in order to maintain its status and the girl’s younger sister’s chances of marrying, the girl with the disorder will be “killed”. A funeral is held. Years pass. When she is seen out and about one night, a mob forms to hunt down and kill the girl, who is believed to have risen from the grave.

In “The Freeze-Dried Groom”, Sam and his wife, Gwyneth, have broken up. Gwyneth insists the marriage is over. Sam, who sells furniture and uses his business as a front for smuggling drugs, goes to bid on a storage units unclaimed by owners. One of the units Sam wins contains an old wedding cake, wedding-related items, and a dead man who appears to have been freeze-dried and wrapped in several layers of plastic. The owner of the unit belatedly shows up, begging to triple Sam’s bid and to sleep with him in exchange for silence. Same takes her up on her offer, but instead kills her.

In “I Dream of Zenia with the Bright Red Teeth”, Charis has a dream about a woman named Zenia, where Zenia appears as a vampire. Charis and her best friends, Tony and Roz, each had a man stolen from them by Zenia. Only Charis remains with her man, Billy, who her dog ends up attacking. It is revealed that Billy was a cruel and callous man who preyed upon women for their wealth, leading Charis and her friends to consider that the dog is Zenia reincarnated, and that in life, Zenia sought to save them by taking away the cruel men in their lives.

In “The Dead Hand Loves You”, Jack, author of the eponymous novel that has made him famous, is forced to share his earnings with his three former roommates, who accepted shares in the story in lieu of Jack’s back rent. Jack now detests the arrangement, especially because his former roommate and lover, Irena, has led the legal charge against him. Jack prepares to murder all of his roommates the way the dead hand did in his novel, but instead learns that Irena is in love with him. Instead of killing her, he plans to propose to her.

In “Stone Mattress”, Verna takes revenge on the popular high school kid, Bob, who got her drunk, slept with her, impregnated her, and left her years before by murdering him on an Arctic cruise decades later. In “Torching the Dusties”, the elderly Wilma and Tobias barely escape their nursing home in time as leftwing protestors torch the place, killing its inhabitants in the name of making room for the young.