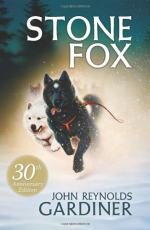 Willy believes that he was just too stressed about the upcoming harvest. They had gone broke the year before, but this harvest was going to be their biggest. With the help of his loyal dog, Searchlight, they’re able to harvest all of the potatoes and get them sold. Despite that, Willy’s grandfather continues to remain in bed. Willy develops a basic form of communication with him though, so he can at least ask him yes and no questions.

After returning home one day, Willy finds a tax collector named Clifford Snyder waiting for him. Clifford is there to collect taxes that Willy’s grandfather owes. It turns out that he owes five hundred dollars, something that Willy can’t afford as he only has fifty dollars in his savings account. Everyone tells Willy that he should just sell the farm as the taxman will likely take it anyway.

Willy is determined not to give up though. He discovers that there is a dog racing contest coming up that has a 500 dollar reward. He and Searchlight enter the contest. Everyone thinks he’s going to lose because he is up against the legendary Native American racer, Stone Fox. Stone Fox is famous for having never lost a race before.

The day of the race comes, and Willy ends up in a fast lead. He’s able to use his lighter weight and the fact that he has only a single dog to his advantage. Willy takes a shortcut across the frozen lake, which gives him a significant lead. While he’s racing, he sees that his grandfather has gotten out of bed to watch the race. Willy is elated, but Stone Fox quickly catches up to him.

The two race neck and neck. Near the finish line, Searchlight suddenly collapses as her heart gives out. To Willy’s horror, she has passed away. Stone Fox refuses to win the race though. He draws a rifle and threatens any of the riders that try to approach the finish line. Willy carries Searchlight across the finish line, mournfully winning the race.