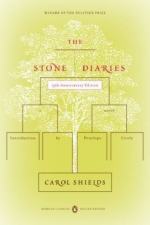 Carol Shields
This Study Guide consists of approximately 36 pages of chapter summaries, quotes, character analysis, themes, and more - everything you need to sharpen your knowledge of The Stone Diaries.

This detailed literature summary also contains Related Titles and a Free Quiz on The Stone Diaries by Carol Shields.

The Stone Diaries is the fictitious autobiography of Daisy Goodwill, conveyed from Daisy's own point of view somewhere in her future. Daisy is the only child of Cuyler and Mercy Goodwill and was born in Manitoba, Canada in 1905. Mercy Goodwill, an obese woman who does not realize she is pregnant, gives birth to Daisy in her kitchen and dies immediately after. Daisy is taken to Winnipeg, Canada, to be raised by her parents' neighbor, Clarentine Flett, who has left her husband, Magnus, to live with her son, Barker, a professor of botany. When Mrs. Flett dies eleven years later, Daisy is reclaimed by her grieving father, Cuyler, who is on his way to Bloomington, Indiana to accept a job in the limestone industry.

In Bloomington, Daisy's father is quite a successful businessman, and Daisy enjoys an upper-middle class upbringing, a college education, and good girlhood friendships. At age twenty-two, Daisy marries a young man of similar social class named Harold Hoad, who drinks heavily because he is haunted by his father's suicide. Harold dies under ambiguous circumstances in Paris on their honeymoon before the marriage is even consummated.

Nine years later, Daisy takes a trip back to Canada to visit Barker Flett, the son of her childhood caregiver, Clarentine. After Clarentine's death, her deserted husband, Magnus, leaves for his childhood home in the Orkney Islands to live out the rest of his life. Daisy and Barker soon marry, despite the difference in their ages, and have three children, Alice Warren, and Joan. Daisy is a housewife and she and Barker lead a pleasant, if monotonous, life.

After twenty years of marriage, Barker dies of a brain tumor, and Daisy's father dies as well. Daisy begins writing a weekly newspaper column and becomes a local celebrity to her faithful readers. Barker's niece, Beverly, and Beverly's daughter, Victoria, born out of wedlock, live with Daisy during this time. Abruptly, the editor of the paper allows another columnist to take over Daisy's column against Daisy's will. Daisy falls into a deep depression after this incident.

In her later years, Daisy sells her home and moves to a retirement community in Florida, where she lives comfortably but is preoccupied with thoughts of her father and her father-in-law. Daisy's children are grown and married, and Daisy is frequently visited by her grand-niece Victoria. Victoria invites Daisy to accompany her on a research trip to the Orkney Islands, where Daisy plans to visit the grave of her father-in-law, Magnus Flett. Upon arrival in the Orkney Islands, Daisy discovers that Magnus is still alive and she pays him a visit.

After many more years living in Florida and making new friends, Daisy. at the age of eighty, suffers health problems, which put her in a hospital and then a convalescent home. Her mind begins to falter as well as her body, and Daisy spends the last years of her life in a semi-comatose state. During this time, Daisy comes to terms with her death and envisions what people will discover and say about her after her death.

More summaries and resources for teaching or studying The Stone Diaries.