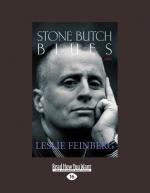 This detailed literature summary also contains Topics for Discussion and a Free Quiz on Stone Butch Blues by Leslie Feinberg.

Butch, according to the dictionary, means "a female homosexual with mannish or aggressive traits." A stone butch has been so battered by homophobia and sexism and the intractable human fear of difference overall that her emotions have turned to stone - she doesn't know how to express the love she does feel, and is terrified of the love that others want to give her. A stone butch has every reason to feel the blues in Leslie Feinberg's critically-acclaimed, award-winning novel Stone Butch Blues.

From her earliest memories, Jess Goldberg knew she was painfully different from other girls. She hates wearing dresses. She is happy wearing her Roy Rogers outfit, even in temple. She feels the curious and angry stares as she passes by - the question, "Is that a boy or a girl?" follows her around like a moth follows a light.

The contempt of her parents and the hatred of most of her classmates become so oppressive that she runs away from home and school shortly before her sixteenth birthday. She finds a new family in the coworkers in the factories where she works and the butches and femmes (lesbians who behave in traditionally feminine ways) who frequent the gay bars of Buffalo, New York.

Trying to find a place in the world - working, falling in love, making decisions that will mark one for years to come - is difficult enough as it is. But when one's very existence is against the law - homosexuality in and of itself was illegal in nearly every state in the 1960s and it was still considered a mental disorder - a solid sense of self is hard to find. Jess hides underneath a "stone butch" persona, which doesn't really protect her from trauma and often distances her from intimacy.

Jess learns that she can take male hormones and "pass" as a man. She feels this is the only way she will stop being targeted as an outsider. But "becoming" a man alienates her from the lesbian community and forces her to live a lie in front of everyone else. In the end, Jess sees that the only way out is - be yourself, then speak up for the rights and dignity that every human being deserves.

When one group is oppressed, we all are oppressed; when the transgendered are finally liberated, it will be liberation for us all.