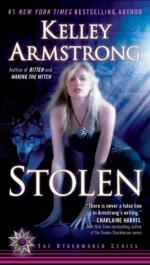 Kelley Armstrong
This Study Guide consists of approximately 34 pages of chapter summaries, quotes, character analysis, themes, and more - everything you need to sharpen your knowledge of Stolen.

Stolen, by Kelley Armstrong, tells the story of Elena Michaels, the only living female werewolf. Shortly after learning about a mysterious plot to capture and study members of supernatural races, Elena is kidnapped and held prisoner in the underground compound where the investigation is taking place. She has never met vampires, demons or witches before, but now finds herself surrounded by them, and all of them are at the mercy of Internet billionaire Tyrone Winsloe, who funds the bizarre project. Rather than waiting for her boyfriend, fellow werewolf Clayton Danvers, and a small band of other supernatural beings to rescue her, Elena takes matters into her own hands and helps bring down the cruel, sadistic Winsloe and his pseudo-scientific investigation.

The book opens with an unnamed shaman fighting for his life as he is being hunted by a group of guards and attack dogs through a dense forest. The reader then meets Elena Michaels, a young woman who has been bitten by her werewolf lover, Clayton Danvers, and is now the only female werewolf. Elena responds to a mysterious summons to Pittsburgh, where she meets Ruth and Paige Winterbourne. They introduce themselves as witches and ask her to bring the leader of her werewolf pack to a secret meeting in Vermont, where a group of supernatural beings will gather to discuss a situation that threatens all of them. Despite her skepticism, Elena attends the meeting with Clay and his father, Jeremy, the alpha of their pack, and they meet half-demon Adam, vampire Cassandra, and shaman Kenneth. On their first night in Vermont, the three werewolves are attacked by three men intent on kidnapping them, but they escape and decide to head home. On the way, however, Elena is kidnapped and taken to an underground bunker where several other supernatural beings are being held captive.

She learns that the investigation is being funded by Internet billionaire Tyrone Winsloe, a sadistic man who takes pleasure in releasing, hunting and killing his research subjects simply for sport. Elena tries to play along with his mind games while figuring out a way to escape and save her fellow captives, which include a 12-year-old witch named Savannah. While at the compound, Elena is befriended by Sondra Bauer, one of the top staff members, but her real motive is revealed when she steals a vial of Elena's saliva and injects it into herself in an attempt to get the power she thinks werewolves and other supernatural races have. Despite Elena's attempts to help her, Bauer eventually is killed during an escape attempt, but not before she transforms into a wolf for the first time and kills Dr. Carmichael, the compound's physician.

Realizing that Clay will put his own life in danger by trying to rescue her, Elena eventually is able to escape the compound and reunite with the group she met in Vermont. Together, they find their way back to the compound, kill all of the guards, and rescue Savannah and the other captives, with the exception of demon Leah and sorcerer Katzen, who turn out to be behind a series of psychic phenomena that have been taking place on the premises and for which Savannah has been blamed. As the book concludes, Elena and Clay find Winsloe on the property and despite his offer to give them everything he owns in exchange for his life, they transform into wolf form and hunt and kill him as he has done to so many of his research subjects.

More summaries and resources for teaching or studying Stolen.