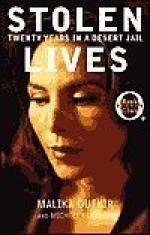 Malika Oufkir
This Study Guide consists of approximately 26 pages of chapter summaries, quotes, character analysis, themes, and more - everything you need to sharpen your knowledge of Stolen Lives.

Malika Oufkir was five when she was taken to the palace for the first time to meet the king. She was immediately intrigued by the young princess but the two girls got into a fight. The king asked to adopt Malika and her parents, Fatima and Muhammad, agreed. Malika was heartbroken and homesick though she lived the life of a pampered princess. She was treated as the king's child and saw her parents only occasionally, but continued to long for home. After the death of the king, his son, Hassan II, took over the throne and Malika's life went on much as before. When she was given the opportunity to speak out to him, she took it and was sent home to live with her parents. She was rebellious and often slipped away at night, dancing in clubs and partying with friends. The political situation became tenuous and Malika was at Casablanca with friends when her father called with what could have been termed a suicide call. His body indicated that he had been shot several times with a fatal blow to the neck. He had apparently been involved in a political situation involving the king and Malika was angry. When the king sent food to the family home, she refused to eat it.

Soon after her father's death, the entire family was told to pack what they would need for a two-week stay and was picked up. Malika had feared that the stay would be longer than two weeks and had encouraged the family to take as much as they could carry. They were taken to a series of prisons, each worse than the last. For many years Malika sought to make their lives as normal as possible for the younger children, including a brother who is only a toddler at the time of their imprisonment. She helped create plays, oversaw daily schooling and even taught them table manners. When the family arrived at Bir-Jdid, where they remained until Malika and three siblings escaped, they were segregated which created as much a hardship as the poor diet and lack of medical care.

Malika and three of her sibling escaped by digging a tunnel out of their cell and the exit was not discovered until hours after they left. They found that their former friends were afraid of the repercussions of helping them but eventually contacted French attorneys who brought their plight to light. With the media attention focused on the fact that the government had held children in prison for fifteen years because their father had been involved in a coup, the situation changed but they were not released. They were taken to a villa, provided plenty of food, but remained prisoners for another five years. It seemed that the king suddenly decided that it was time to set them free and did so. Malika and the others then had to discover how to live on their own again with the past twenty years of imprisonment behind them. They each have trouble adjusting but eventually find their way.

More summaries and resources for teaching or studying Stolen Lives: Twenty Years in a Desert Jail.