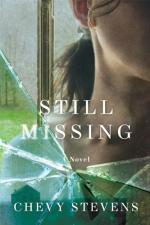 Chevy Stevens
This Study Guide consists of approximately 31 pages of chapter summaries, quotes, character analysis, themes, and more - everything you need to sharpen your knowledge of Still Missing.

This detailed literature summary also contains Topics for Discussion and a Free Quiz on Still Missing by Chevy Stevens.

Still Missing is the debut novel of new writer Chevy Stevens. In this novel, Annie O'Sullivan has recently returned home after being abducted by a psychiatrist who kept her hostage in a mountain cabin for a year. Annie works with a psychologist in multiple sessions in an attempt to return to something of a normal mental state as she learns more and more about the man who abducted her and the plot behind his actions. Still Missing is a psychological thriller that will haunt the reader weeks after the final words are read.

Annie O'Sullivan has been home for less than four months and is attempting to put her life back together after having been held captive by a psychopath for a year. In her attempts to overcome the mental damage done by her abduction and captivity, Annie is seeing a psychiatrist. In her sessions with the psychiatrist, Annie tells her story of captivity and reveals clues in the investigation.

In the first session with her psychiatrist, Annie talks about the open house she was hosting when a strange man arrived at the last minute and asked for a tour of the house. After entering the house, the man pressed a gun into Annie's back and forced her into his van. On a mountain road, the man, who called himself David, injected Annie with some kind of tranquilizer. By the time Annie woke, she was in a cabin with locks on all the drawers and cabinets.

David returned to the cabin from some unknown location and washed Annie in the bathtub before dressing her in a fancy, white dress. David then took Annie to bed. As she struggled, Annie realized David took pleasure from it, so she stopped. This caused David to be unable to succeed in raping Annie. For several days Annie repeated her passive reaction to David's attempts at rape, causing him to become so frustrated that one night he beat her so severely, she lost consciousness. When she woke, David was gone.

Annie spent five days alone, becoming more frightened of starving together in the locked cabin then she was on being brutalized by David, whom she had begun to think of as the Freak. When David finally returned, Annie forced herself to figure out what it was he wanted and to give it to him. In a short time, Annie found herself submitting to his needs and obeying his outrageous rules. Annie also found herself pregnant.

After a long winter on the mountain, the Freak began allowing Annie out of the cabin to help him with the garden and other chores. Annie learned to take pleasure from these small snatches of freedom. Annie never thought of running away, however, because she thought the Freak would catch her before she could get very far. It was during one of these rare trips outside that Annie went into labor with her child. The Freak panicked as Annie began to give birth, leaving her largely on her own throughout the process.

The baby, a girl, was born healthy. Annie cared for her the best she could, but lived in constant fear that the Freak would hurt the child. When the baby became sick, Annie begged the Freak to take her to a doctor, but he refused. One night Annie woke to find the Freak holding her dead baby. The Freak took the baby away and refused to tell Annie where they had gone. A short time later, the Freak announced that he planned to impregnate Annie again. In fear and shock, Annie killed the Freak with an ax blow to the head.

Annie ran away and took herself to the police. Eventually Annie met Gary, a kind police sergeant who treated her with the care and respect Annie needed. Over time, Annie returned home and tried to return to a normal life, but learning to trust people again was difficult. Then, when someone broke into her house and then attempted to abduct her on the streets, Annie became convinced her abductor had a partner. With Gary's help, Annie eventually learned the truth: that her own mother paid her abductor to take her in a ploy to make money off the story.

More summaries and resources for teaching or studying Still Missing.