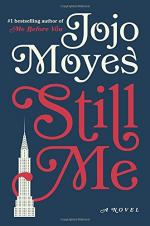 Get Still Me from Amazon.com
View the Study Pack
View the Lesson Plans
Study Guide
Order our Still Me Study Guide

Jojo Moyes
This Study Guide consists of approximately 55 pages of chapter summaries, quotes, character analysis, themes, and more - everything you need to sharpen your knowledge of Still Me.

Still Me Summary & Study Guide includes comprehensive information and analysis to help you understand the book. This study guide contains the following sections:

This detailed literature summary also contains Quotes and a Free Quiz on Still Me by Jojo Moyes.

The following version of this book was used to create this study guide: Moyes, Jojo. Still Me. Pamela Dorman Books, 2018.

Louisa Clark arrived in New York from England. She began working as Agnes Gopnik’s assistant. The Gopniks were a wealthy family that lived in the Lavery hotel. Louisa lived in the staff quarters of the Gopniks’ apartment with her friend Nathan, who was Mr. Gopnik’s personal trainer, and Ilaria, who was the Gopniks’ housekeeper. Agnes, Mr Gopnik’s young Polish wife, insisted that Louisa view her as a friend. Agnes invited Louisa to accompany her to a charity event called the Yellow Ball because she felt uncomfortable around all the people who judged her at Mr. Gopniks’ elite social events. At the ball, Louisa met Josh Ryan, a man from a wealthy family who looked like Louisa’s first love Will Traynor. Following the ball, Agnes expressed to Louisa how uncomfortable she felt in her new lifestyle, having lost all her old friends once she married her rich husband.

Louisa’s boyfriend Sam, a paramedic from London, visited Louisa in New York. He got food poisoning on his first day there and was ill for the entire weekend. Agnes began taking drawing lessons from an artist Steven Lipkott. Louisa accompanied Agnes to the country club to deliver a speech to a retiring staff member. Mr. Gopnik’s first wife showed Agnes up by giving a more heartfelt speech. Louisa ran into Josh at a bar. He flirted with her, but Louisa insisted that she was not interested because she had a boyfriend. Louisa called Sam later and discovered that his new work partner Katie was romantically interested in him, which made her jealous. Louisa helped Mrs. De Witt, the old woman next door, find her dog, Dean Martin, who had run away.

Agnes decided to go to Poland to visit her family and gave Louisa a long weekend off. Sam said he had plans, so Louisa wandered the city. She found the Vintage Clothes Emporium and befriended the owner. She returned to the Lavery and offered to babysit the doorman Ashok’s children. After putting the children to sleep with the help of Ilaria, Louisa found Sam at her door. Sam had decided to surprise her with a visit. Louisa and Sam went to a bar together and encountered Josh. Later, Sam found a pregnancy test in Louisa’s bathroom and thought she was cheating on him. Sam left. Louisa discovered that the pregnancy test was Agnes’. Agnes had to make sure that she was not pregnant because Mr. Gopnik did not want any more children. Agnes instructed Louisa to withdraw small amounts of cash from Agnes’ account every week to buy a small piano and ship it to her niece in Poland. She wanted to make sure that the payment would not appear on her credit card since Mr. Gopnik thought she spent too much money on her niece. Louisa attended Thanksgiving dinner with the Gopniks, at Agnes’ request.

Louisa went to England to spend Christmas with her family She planned to surprise Sam by meeting him a few days early, but when she went to his house, she saw him with Katie. Distraught, she returned to her family. She lied to Sam and told him that she missed her flight and would not be home for a few days. Sam arrived at her parents’ house on Christmas and Louisa broke up with him. Louisa’s sister Treena came out to her family and introduced them to her new girlfriend Eddie.

Louisa returned to New York after the holidays. She brought Agnes to an art lesson. Mr. Gopnik called her, asking for Agnes, so Louisa entered Steven Lipkott’s apartment to find her. She saw a painting of a child that looked just like Agnes. Agnes explained that she had a daughter in Poland before meeting Mr. Gopnik, but never told him about it. Louisa promised to keep Agnes’ secret. She went for drinks with Josh. She got drunk and woke up in his apartment, but Josh reassured her that they did not sleep together. When Louisa returned to the Gopniks’ apartment, Mr, Gopnik confronted her about the cash she had been withdrawing every day. Louisa would not admit that Agnes had instructed her to purchase a piano for her daughter. Mr. Gopnik fired Louisa. Nathan let Louisa stay in his room for several days.

Louisa began dating Josh. She attended work events with him. She returned to England for her grandfather’s funeral. She helped reconnect Mrs. De Witt with her son and grandson. She learned that Mrs. De Witt had cancer. Josh requested that Louisa change her outfit before accompanying him to a dinner with his boss, but Louisa refused to do so and broke up with him. Mrs. De Witt decided to move in with her son’s family. She gave Dean Martin and her entire wardrobe to Louisa and let Louisa stay in her apartment. Louisa decided to start a new business with the Vintage Clothes Emporium, in which she would rent out clothes to people. Louisa received letters in the mail from Sam. She realized she still cared for him over a series of correspondences with him. She told Sam that she did not want to leave her new job in New York and asked him to move to New York with her. She asked him to meet her at Rockefeller Center if he accepted her offer.

More summaries and resources for teaching or studying Still Me.

Still Me from BookRags. (c)2022 BookRags, Inc. All rights reserved.