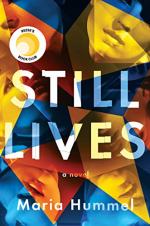 The novel opens in Los Angeles, California. The protagonist and narrator, Maggie Richter, is a writer and editor in the public relations department of a modern art museum called the Rocque Museum. Maggie is originally from Vermont and had aspired to be a journalist. However, after Maggie helped a journalist with an exposé of local drug trafficking, Maggie’ friend Nikki was murdered. Nikki had been involved in the drug trafficking, and her associates wrongly thought that she informed the press, so they killed her. Maggie gave up journalism and moved to Los Angeles. She eventually began dating a gallerist named Greg, but he eventually left her and began dating a successful artist named Kim Lord.

At the beginning of the novel, Kim’s newest gallery show, entitled Still Lives, is set to premiere at the Rocque. The paintings in the exhibition depict female murder victims of famous American murder cases of the twentieth century. On the day of the premiere, Kim is nowhere to be found, and no one is able to contact her. The next day, police begin investigating her disappearance. Greg is the police’s primary suspect, and the police also seem to be suspicious of Maggie. Maggie begins to investigate Kim’s disappearance on her own. Using her own resourcefulness and her connections in the art world, she begins to acquire clues and information. She begins to suspect a wealthy art collector named Steve Goetz, who had been collecting Kim’s artworks. Kim had decided to donate her Still Lives paintings to the Rocque, potentially to spite Goetz.

Kim’s body is eventually found buried in a park. Maggie continues to investigate. She learns that Kim was pregnant when she died, and Maggie hears rumors that Kim was having an affair with an artist named Brent Patrick. Maggie also hears rumors that a Rocque staff member named Evie harbored feelings of love for Evie. Maggie begins to investigate Evie and finds several strong pieces of evidence implicating her. Maggie contacts the authorities and then confronts Evie. Evie tries to kill Maggie and escape, but she fails and is arrested by the police for killing Kim.

Hendricks, a private investigator who had been hired to look for Kim, advises Maggie not to tell anyone that Evie tried to kill her. Hendricks reasoned that if Maggie did so, she would necessarily become a witness in Evie’s trial. The ensuing media coverage would then rob Maggie of all privacy and autonomy. Evie takes Hendricks’ advice. Maggie goes to stay with her mother in Vermont for a brief period of time. Eventually, she decides to return to Los Angeles. She feels a sense of personal triumph and renewal after having caught Evie, and she feels ready to face life with a renewed sense of courage and determination.