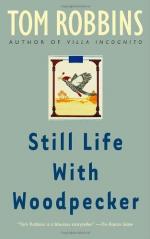 Tom Robbins
This Study Guide consists of approximately 54 pages of chapter summaries, quotes, character analysis, themes, and more - everything you need to sharpen your knowledge of Still Life with Woodpecker.

This detailed literature summary also contains Topics for Discussion and a Free Quiz on Still Life with Woodpecker by Tom Robbins.

This novel is a complex, sardonic interweaving of fairy tale and philosophy. It tells the sometimes violent, often outrageous and occasionally sentimental story of the sexual and emotional coming of age of its heroine, the idealistic Leigh-Cheri, a princess of the kingdom of the heart. Its short chapters, digressions into authorial opinion, eccentric imagery and near-delirious use of language, all grounded in a thematic exploration of the nature and manifestations of idealism, create a powerful sense of pointed playfulness. In an engaging atmosphere, its simultaneously down to earth and dreamy characters find moonstruck moments of transcendent truth in the midst of chaos and uncertainty.

The novel's early chapters define the home life of its central character, the disenfranchised but nevertheless idealistic princess Leigh-Cheri. Her misadventures as a pregnant teenage cheerleader in a Seattle university, and as the daughter of self-absorbed royalty in exile, are described in detail that at times resembles elements of fairy tale and romance.

Leigh-Cheri's idealistically activist life changes in drastic and unexpected ways when she flies to Hawaii to attend a conference of environmental activists called the Care Fest. While there, she encounters Bernard Mickey Wrangle, a self-described outlaw bomber who comes to Hawaii with the intent of bombing the Care Fest, which he sees as hypocritical, but instead bombs a convention of UFO observers. He is observed planting his bombs by Leigh-Cheri's chaperone, the elderly Gulietta, who later points him out. Leigh-Cheri, angry at the Care Fest having been disrupted by the bombing (even though it was another conference that was actually bombed) attempts to place Bernard under citizen's arrest, but instead falls into both love and lust with him, continuing to see him in spite of learning that he has an extensive criminal past. This past eventually catches up with him, and he's put in jail for a period of several months. Leigh-Cheri, in an act of love and solidarity, imposes imprisonment on herself, locks herself into the attic of her parents' home, and recreates the conditions of Bernard's imprisonment, as closely as possible, for herself.

During the several months of her self-imposed incarceration, Leigh-Cheri spends a great deal of time contemplating a pack of Camel cigarettes, a duplicate of the package Bernard has in his cell (this information is passed to her by Bernard's lawyer, Nina). Leigh-Cheri comes to believe there is a secret spiritual message contained in the package's design, a message she believes echoes Bernard's outlaw philosophy and that she resolves to live by when they're both released. One day, however, she receives a letter from Bernard indicating that he's lost respect for her, saying that for her to demonstrate her love for him in the way she's doing is selfish and attention seeking and that as an outlaw, he can have nothing more to do with her. Leigh-Cheri, heartbroken, resolves to marry the man her parents want her to marry, an Arab businessman named A'ben.

As part of her agreement to marry A'ben, Leigh-Cheri insists that he fund the construction of a pyramid, similar to the one on the cover of the Camel package, as a manifestation of the spiritual message she comes to believe is contained in the package's design. She also enters into an occasional but powerfully intense sexual relationship with him. As the pyramid is nearing completion and the day of her wedding draws closer, Leigh-Cheri begins to doubt whether she's doing the right thing. Her doubts are increased when she hears that Bernard is dead. Disconsolate and confused, she goes into the heart of the pyramid, where she's shocked to discover Bernard alive!

It turns out that the dead man thought to be Bernard was, in fact, a colleague from prison using one of his many false passports. As Bernard and Leigh-Cheri joyfully reunite, they are seen by the jealous A'ben, who locks them in the pyramid with little food and no water. Over the course of their imprisonment, which lasts for over a month, Bernard and Leigh-Cheri debate the nature of their relationship, the nature of Leigh-Cheri's vision, and Bernard's nature as an outlaw ... all the while resisting the powerful urge to have sex. Eventually, however, the urge becomes too much, and they make intense love. Afterwards, Bernard falls asleep. Leigh-Cheri takes the opportunity to use the dynamite Bernard smuggled into the pyramid to blow their way to safety.

Leigh-Cheri and Bernard are deafened by the explosion that frees them, but escape to start a new life together in the home left to them by Leigh-Cheri's father, dead of a heart attack while gambling in Reno, Nevada. They come to the end of their story, living happily ever after and having discovered at least part of the answer to the question that has plagued them both since the beginning of the novel - how can someone make love stay.

More summaries and resources for teaching or studying Still Life with Woodpecker.