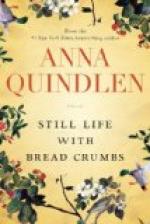 Plot Summary
+Chapters Summary and Analysis
No Outlet - Family of Origin
Family of Origin - Woman Without a Man
Fish, Bicycle - This is How These Things Happen, Part 2
What Came Next Her - Papa Gone
Shivah - Still Life With Tin Roof
Free Quiz
Characters
Symbols and Symbolism
Settings
Themes and Motifs
Styles
Quotes
Order our Still Life With Bread Crumbs Study Guide

Still Life With Bread Crumbs - Fish, Bicycle - This is How These Things Happen, Part 2 Summary & Analysis

Anna Quindlen
This Study Guide consists of approximately 30 pages of chapter summaries, quotes, character analysis, themes, and more - everything you need to sharpen your knowledge of Still Life With Bread Crumbs.

Fish, Bicycle - This is How These Things Happen, Part 2

The last time Rebecca remembers seeing Peter, now near seventy, was at Ben’s college graduation. He is balding and it makes Rebecca happy. She is not mad that Peter betrayed her by sleeping with another, but betrayed the family –specifically, Ben –by doing this. Peter dominated the marriage, being very controlling and careless. Originally, she had met him at a party when she was nearly thirty. At the wedding, Rebecca’s grandmother was unhappy that Peter didn't break a glass, consistent with Jewish tradition. Peter does not like things remaining the same. He wants an exotic wife, which he believes Rebecca to be, but she isn’t. After ten years of marriage, followed by divorce, Peter, at age fifty, marries a university...

(read more from the Fish, Bicycle - This is How These Things Happen, Part 2 Summary)

More summaries and resources for teaching or studying Still Life With Bread Crumbs.