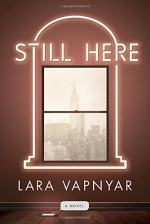 Lara Vapnyar
This Study Guide consists of approximately 82 pages of chapter summaries, quotes, character analysis, themes, and more - everything you need to sharpen your knowledge of Still Here.

NOTE: The following version of the novel was used to create this Study Guide: Vapnyar, Lara. Still Here. Hogarth, August 2, 2016.

Believing a person should have the right to take charge of his social media accounts, even after death, Sergey developed a plan to create a social app for this purpose in the novel Still Here by Lara Vapnyar. The app caused a good deal of controversy between his friends and those he told about his idea. Some thought the app was a good idea. Some did not understand it. Some did not even want to think about the idea of a dead person being able to talk posthumously on social media. The app and the idea of virtual immortality were only a few of the ideas that Sergey and his four friends, all immigrants from Russia, must face. Themes in the novel include the challenges of parenthood, the disillusionment of immigrants in America, and the falseness of one’s social media presence.

Although considered a loser by some of his friends and his wife, Sergey emerges as the unlikely hero by the end of the novel. His idea for an app that allowed the dead to preprogram messages to be sent out on social media and allowed those facing death to take charge of their social media accounts was scorned by his friends when he first mentioned it. His friend Bob would not invest in it. His friend Vadik said it was stupid. Vica believed in the app but was frustrated with her husband because he could not keep a job that would support them financially. When she kicked him out of the house, Sergey devoted his life to developing the app. Just as he had given up on it, a person stepped forward to invest in it.

Because she and Sergey had been so poor since they had arrived in America, Vica was frustrated and unhappy. She fixated on the material things she could not buy, believing that was where happiness was found. After Vica realized that even the rich died, she began to miss the love she had known with Sergey. The two reunited and began to work on repairing their relationship. Vica also got to know Regina, the woman from whom she had stolen Sergey when they were in college. Vica realized although she was rich, Regina was neither snobby nor vindictive. The two struck up a friendship.

Regina, meanwhile, struggled to find meaning in her mother’s death. For nearly two years she barely left the house and did little but eat and watch television. With the not so gentle prompting of her Aunt Masha, Regina and her husband Bob decided to adopt Nastya, a young Russian girl whose mother was killed in a car wreck. Regina struggled with her fear she would not be able to love the girl properly even though she knew she would be able to provide for all of her material needs.

Through his years in America, Vadik swore to his friends that he had met and lost the love of his life the first day he had been in that new country. Although his friends did not believe him, Vadik proved to himself that he and Rachel had been attracted to one another when he met up with her again. She was engaged so there was no hope for them to initiate a relationship at that point but it was clear that they had each felt something special for the other.

The novel concludes with Vadik leaving America to start a new life for himself. He believed perhaps he was not meant to fit in anywhere but instead to keep moving around. As he tried to get more in touch with his real life and real self, Vadik deleted his social media accounts with the idea he would be able to live more fully in that way.

More summaries and resources for teaching or studying Still Here.