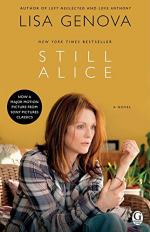 Lisa Genova
This Study Guide consists of approximately 48 pages of chapter summaries, quotes, character analysis, themes, and more - everything you need to sharpen your knowledge of Still Alice.

Alice Howland is a 50-year-old professor of psychology at Harvard University. She is in good shape physically and feels that her life is mostly on track. When she begins forgetting things, she puts it down to a combination of age, her hectic schedule, and menopause. She makes an appointment to visit her doctor who sends her to a neurologist for further testing. Alice is devastated when she's diagnosed with Alzheimer's.

She doesn't tell her family for awhile but finally realizes that she has to tell her husband, John. John, a professor and researcher at Harvard, devotes himself to finding a medicine that will halt the progression of the disease. He throws himself completely into that while Alice continues to try to cope with her failing memory. She manages to hold herself together until the end of the semester and she and John spend their time off at their summer home.

There, Alice's disease progresses. She returns to the university in the fall to discover some of her students have complained about her performance the previous semester. Alice tells her department chairman of her diagnosis and agrees that it's not wise for her to continue teaching. She feels a huge sense of loss because teaching has consumed her time and energy for many years. She struggles to accept that she is no longer a teacher, researcher, or mentor.

Alice tries to hold on to her new life but can feel pieces of her memory slipping away. She soon has trouble remembering her younger daughter, Lydia. She can accept that she has a daughter named Lydia but has trouble associating that information with the young woman who is her daughter. There are other struggles as well, and John insists that she no longer go running alone. He sometimes makes time to run with her but doesn't enjoy it and Alice is soon forced to give up that activity.

Alice resents giving up the running because she believes regular exercise may be a key to keeping her memories intact longer. Then John announces that he's been offered a prestigious position in New York. Alice doesn't want to move but she's also hurt that John isn't going to take a sabbatical year to spend time together. She knows that this will likely be the end of their lives together because she will soon fail to even recognize John. John doesn't feel that he can miss the opportunity and he seems intent on taking the job. Alice's three children also want her to remain in Boston so they can help take care of her. John says he'll hire someone but the children insist that isn't what's best for Alice.

Time passes and Alice's life becomes a series of struggles as she tries to remember how to function in her day-to-day life. Months later, Alice remains in Boston with her two daughters, Anna and Lydia, nearby. She spends most week days with a caregiver. Alice has come to realize the woman can help her function even when Alice isn't certain about what to do. She and the caregiver spend time in a local park, as they often do, then return home where Lydia and Anna are waiting with Anna's twins. Though Alice can no longer remember their names, she recognizes a bond with this family and enjoys spending time with her grandchildren.

More summaries and resources for teaching or studying Still Alice.