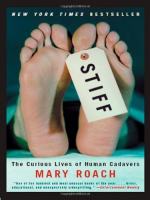 Plot Summary
+Chapters Summary and Analysis
Chapter 1, A Head is a Terrible Thing to Waste
Chapter 2, Crimes of Anatomy
Chapter 3, Life After Death
Chapter 4, Dead Man Driving
Chapter 5, Beyond the Black Box
Chapter 6, The Cadaver Who Joined the Army
Chapter 7, Holy Cadaver
Chapter 8, How to Know if You're Dead
Chapter 9, Just a Head
Chapter 10, Eat Me
Chapter 11, Out of the Fire, into the Compost Bin
Chapter 12, Remains of the Author
Free Quiz
Characters
Objects/Places
Themes
Style
Quotes
Topics for Discussion
Order our Stiff: The Curious Lives of Human Cadavers Study Guide

Related Topics
Grunt: The Curious Science of Humans at War

Mary Roach
This Study Guide consists of approximately 29 pages of chapter summaries, quotes, character analysis, themes, and more - everything you need to sharpen your knowledge of Stiff.

This detailed literature summary also contains Topics for Discussion and a Free Quiz on Stiff: The Curious Lives of Human Cadavers by Mary Roach.

Mary Roach begins her research of human cadavers by attending a facial anatomy and facelift refresher course, where surgeons practice new techniques on the freshly severed heads of human cadavers. Roach learns that surgeons cope by objectifying human remains, willfully seeing them as objects. The author sees the obvious benefit of learning surgical techniques using cadavers. Since they feel no pain and cannot die due to complications, cadavers offer immediate benefits for surgical study. She sees this as a great improvement over how surgery was once taught on live patients without the benefit of anesthesia.

Roach visits the gross anatomy lab of University of California San Francisco. She attends a surprisingly touching memorial for the lab's unnamed cadavers and is impressed at the respect the students offer their cadavers. She notes that a lot has changed since the shady "body snatching" days of early medicine. Next she visits the University of Tennessee to observe field research on the decay of human bodies, where she is shown a series of cadavers representing increasing stages of decay. Roach discovers that not even embalming can prevent the eventual decay of organic tissue.

At Wayne State University, Roach watches how cadavers are used in impact studies. Despite being very controversial, cadavers have made great contributions to the evolution of car safety, particular with regard to windshields and steering wheels. Later, Roach meets with the injury analyst who investigated the crash of TWA flight 800. Here she learns how the aggregate wounds suffered by deceased passengers can tell the story of what happened in the moments just before an air disaster.

Roach observes the way cadavers are used in research involving weapons and ballistics. Although society frowns on such a thing, the author sees that such study can be undertaken for humanitarian purposes. She is less impressed, however, with cadavers used to promote religious propaganda, such as the studies undertaken to prove the efficacy of the Shroud of Turin. At UCSF medical center, however, Roach is touched and awed by the sight of a "beating heart cadaver" having its still-functioning organs removed by doctors.

Next Roach considers the seat of the human soul, looking at decapitation, reanimation, and head transplants. She briefly touches on several moments of history ranging from the guillotines of the French revolution to the weirder experiments of modern neurosurgery. Roach then considers medicinal cannibalism, looking at historical examples of how and why humans have eaten one another. She takes a trip to China to investigate a particularly morbid tale.

Roach considers alternative funerals, looking at tissue digestion and human composting. Both methods are more environmentally sound than traditional means, but are unusual enough to give most people pause. The author closes out the book by considering her own eventual funeral. After looking over several options, she ultimately decides that, since he is not going to be around to benefit from any of her decisions, she should allow her husband to do whatever he needs to do to make peace with her passing.

More summaries and resources for teaching or studying Stiff: The Curious Lives of Human Cadavers.