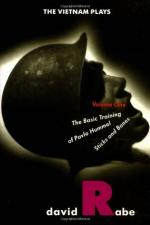 Sticks and Bones opens with a slide show of family pictures. The offstage voices of an adult couple explain who are in the slides to the voices of children.

The scene moves to a home headed by parents Ozzie and Harriet By phone, Ozzie learns that the government is sending their elder son David home from serving in the war in Vietnam. The family is excited by the prospect. Ozzie and Harriet share memories, some negative, about David Ozzie also discusses his experiences in World War II, justifying his non-combative role to his younger son Rick; though Ozzie was not a soldier, he played an important role building war vehicles

A Sergeant Major delivers the now-blind David to his family. The family is uneasy about David's disability and appearance David is also uncomfortable and wants to leave. The sergeant will not let David come with him...