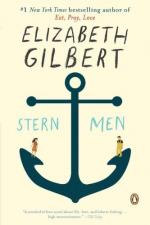 Elizabeth Gilbert
This Study Guide consists of approximately 68 pages of chapter summaries, quotes, character analysis, themes, and more - everything you need to sharpen your knowledge of Stern Men.

This detailed literature summary also contains Topics for Discussion and a Free Quiz on Stern Men by Elizabeth Gilbert.

Stern Men by Elizabeth Gilbert follows the life of Ruth Thomas, an intelligent and sarcastic young woman who refuses to leave the dreary and difficult life of a lobster fishing island and against all odds, becomes the savior of a doomed industry and culture.

Born in May of 1958, Ruth Thomas is beautiful but cantankerous. Her mother, an outsider, leaves Fort Niles when Ruth is four. Ruth is raised by her neighbor, the beautiful widow Rhonda Pommeroy, mother to seven rambunctious boys. Ruth's father is a greedy lobsterman who speaks little is easily annoyed. Ruth's mother sends her to Delaware to an elite girl's school, which Ruth hates and whose influence she does her best to overcome after graduation. There is no work for her when she comes home, not even as sternman for her father. With nothing to do, she and old Senator Simon Addams, a family friend, watch hapless Webster Pommeroy search for legendary elephant tusks in the mudflats. Simon wants to found a natural history museum but cannot obtain housing for it.

When against all odds, they find a tusk and show it to tycoon Lanford Ellis, who has always steered and financed Ruth's life and thus earned her wrath, he pays her to visit her mother in Concord, NH. It is the worst week of her life and is followed much more nothing to do that stretches for months until Ruth accompanies Rhonda to Courne Haven to style hair for a gala wedding. Meeting Lanford there, she asks to use his abandoned general store for the Museum and is given the key. She also snoops through Pastor Toby Wishnell's Victorian mansion looking for his nephew Owney in whom she is interested, is caught, and sternly lectured. Ruth makes up for it by having sex with Owney. For the next few months, she lies low while Lanford expects her to come to dinner as promised.

Ruth and Owney marry and she conceives the need for a lobstermen's cooperative. She builds one in stages, making it financially beneficial to the lobstermen but also psychologically acceptable to join. She then approaches Lanford to ask for land on which to build a home. As they talk and as she seethes about how his family has used hers for generations, Ruth demands that he cede to her grand Ellis House itself and vacate the premises. Lanford agrees and surprises Ruth by detailing how and why he has watched over her, hoping and believing that her stubborn character would lead to the salvation of the islands.

More summaries and resources for teaching or studying Stern Men.