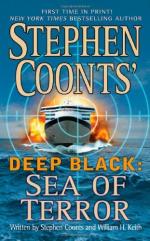 Stephen Coonts
This Study Guide consists of approximately 37 pages of chapter summaries, quotes, character analysis, themes, and more - everything you need to sharpen your knowledge of Stephen Coonts' Deep Black.

The book opens with Charles Dean and his partner, Tommy Karr, riding separately on a bus and seeing a beautiful woman being robbed. Both run to help the woman. Tommy catches the thief and returns the purse to the woman. Tommy and Charles decide to have coffee while waiting for their afternoon meeting.

After this, the action of the book begins to explode. The two men work for the National Security Agency in Deep Black, a highly secret covert operations division that uses the most advanced technology in the world. The two men are on their way to a meeting, but before they meet their contact in the park, he is shot in front of them. The only problem is, he wasn't their real contact.

In France, a terrorist named Mussa Duoar is having a technician explain a computer simulation to him. Their network uses hijacked computers to store and pass information. He has plans to detonate a bomb in such a way that it will cause a flood of several countries in Europe. There is also a planned attack on the Eiffel Tower. He is motivated by revenge due to the death of his father in the Algerian independence movement.

The Americans have discovered that a French nuclear warhead is missing - or at least part of it is missing. Where is it? They are trying to find out. At the same time, the NSA is monitoring and tracking the activity on the hijacked computers that are being remotely accessed by the terrorists. The engineers and technicians find data and files on them that allows them to piecemeal the plans for a terrorist attack, but the French don't believe the Americans when they are informed of a possible attack on the Eiffel Tower.

And if this isn't enough action for one novel, there is also the love angle. There is Tommy and Deidre, who met when Karr retrieved her stolen purse in London. She is the daughter of the American Ambassador to England. And there is also Lia and Charlie, two Deep Black agents, who have worked together for years and fall in love.

There is also the technology angle that is almost as exciting as the action of the novel. There is a communications network that allows the Art Room of the NSA to communicate with their agents anywhere in the world, except in the Chunnel. There are also the little gadgets that the agents use like the video fly that send video to the Art Room, which is the place in the NSA that receives all of the data.

Stephen Coonts writes a novel that is full of suspense and intrigue and once the reader begins the book, he will have a hard time putting it down until he finishes the book. Any reader of suspense novels will enjoy Deep Black: Dark Zone.