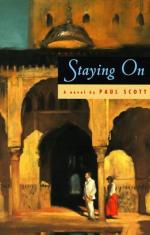 Staying On Summary & Study Guide includes comprehensive information and analysis to help you understand the book. This study guide contains the following sections:

This detailed literature summary also contains Topics for Discussion and a Free Quiz on Staying On by Paul Scott.

Staying On takes place in early 1972 in Pankot, India. The story begins and ends with the death of one of the main characters, Tusker Smalley, from a heart attack. This occurs shortly after he receives a letter from his landlord, the owner of the adjacent hotel. In between the two descriptions of this event, the reader becomes acquainted with Tusker, his wife Lucy, and an assortment of people in their lives and memories.

Lucy and Tusker have been married for 40 years and have been in India for all of that time except for one short trip to England. Tusker was a Colonel in the British Army, forced into early retirement when India gained its independence from Great Britain and the British military departed for home. He chose to "stay on"; first to assist the Indian transition, later with a private firm, and finally in retirement. Lucy agreed at first, but was not consulted in the final decision to stay in India after retirement. She is not happy remaining after all the other British families left. Although she loves Tusker, she feels quite isolated and afraid of what will happen to her if he dies first.

After opening with Tusker's death, the story transitions back to Tusker's first heart attack about three months earlier. Tusker is agitated over the state of the garden and believes that Mrs. Bhoolabhoy (their landlord) is not fulfilling the terms of their lease. Lucy is determined that Tusker will get well so she will not be left alone. This leads her to conspire with Ibrahim, their servant, to hire a new gardener. They let Tusker believe that Mrs. Bhoolabhoy has hired the gardener, a deception that Mr. Bhoolabhoy assists with.

As Tusker recovers from his first heart attack he notices, but does not ask about, the new gardener. Tusker spends much of his time reading and commenting on a small history of Pankot. Lucy seems to move more into the past, reliving their travels and better times.

A letter from England sends Lucy down memory lane. She conveys a great deal of history in imaginary conversations with a prospective visitor, David Turner, whom the reader never meets. Through this mechanism, Lucy and Tusker's background is revealed along with their feelings, fears, and hopes. Much of the book revolves around Lucy's frustrations with Tusker, their current lack of funds, and the attitude Tusker had towards work and advancement that has placed them in this situation. Lucy does work up the courage to demand an accounting from Tusker on what income she would have should he die first. This leads to what she regards as the first and only love letter she has received in her life, given to her by Tusker just the day before he dies. It confirms that she will have little income and few options other than to stay on. There is also a great deal of time spent in gaining insight into how other characters view Lucy and Tusker.

Mr. Francis Bhoolabhoy is as different from his wife as Lucy is from Tusker. He loves the hotel, which he managed before marrying his wife, and is devoted to his work at the church. Francis and Tusker are friends and often spend Monday evening "being convivial" while Lucy goes to a movie and Mrs. Bhoolabhoy plays bridge. Pankot is his world and he is very happy there, although that world begins to crumble around him during the course of the book. Mrs. Bhoolabhoy originally bought the hotel in an effort to gain entrance into a larger consortium and she succeeds in her efforts during the course of the story. Mr. Bhoolabhoy is very upset about the likely changes, including having to write a letter essentially evicting the Smalleys from their place. This letter apparently causes Tusker's fatal attack.

The end of the book literally repeats some of the opening paragraphs but the reader now knows what has lead up to the delivery of the fateful letter and Tusker's reaction to it.