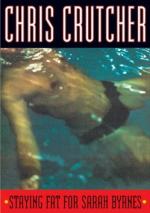 Chris Crutcher
This Study Guide consists of approximately 31 pages of chapter summaries, quotes, character analysis, themes, and more - everything you need to sharpen your knowledge of Staying Fat for Sarah Byrnes.

This detailed literature summary also contains Topics for Discussion and a Free Quiz on Staying Fat for Sarah Byrnes by Chris Crutcher.

Staying Fat for Sarah Byrnes is a young adult novel by writer Chris Crutcher. Moby is a high school senior whose best friend, Sarah Byrnes, has been put in a hospital because she refuses to speak. Sarah Byrnes, a young woman disfigured by burns she received when she was three, has always been a friend to Moby even when his excess weight made him an outcast at school. Now Sarah Byrnes needs Moby to be her strength like she was his in junior high. Moby does not know who he can trust but finds himself turning to the most unlikely people to find a way to protect his best friend. Staying Fat for Sarah Byrnes is about being an outcast, about friendship, and about standing up for what is right, even when it means betraying the trust of the one who has always been there.

Moby visits Sarah Byrnes, his best friend, in the hospital where she was taken after she quit speaking. Moby does not know if Sarah Byrnes is faking but is determined to do all he can to make her okay again. Moby sees Sarah Byrnes everyday, talking to her about their escapades in junior high when they were both outcasts tortured by bullies who seemed to take special interest in the two of them. Moby and Sarah Byrnes created a newspaper in junior high called Crispy Pork Rinds. The title of the paper refers to Sarah Byrnes' scarred face and hands, a result of burns she received at the age of three, and Moby's excess body fat. The first edition of the paper targeted one bully in particular, Dale Thornton. Dale was punished as a result of the article, so he went after Moby for some payback. Sarah Byrnes realizes that Dale must have learned Moby was the author through the principal at the school, so she befriends Dale to present a united fate against the principal with latter issues of the paper.

Moby was asked to join the swim team as they entered high school. Moby began to lose weight but was afraid if he became skinny, Sarah Byrnes would assume he no longer wanted to be her friend, so he began eating more to stay fat for her. Eventually Sarah Byrnes tells him to stop it; however, during this time, Sarah Byrnes became closer friends with Dale. Dale and Sarah Byrnes have an abuse in common; therefore, Sarah Byrnes told Dale things she never told Moby. As a result, Moby finds himself turning to one of his worse enemies when Sarah Byrnes is admitted to the hospital in an attempt to help her. Moby then uses the information Dale gave him to force Sarah Byrnes to show that her break with reality is fake.

Sarah Byrnes tells Moby, both in person and in a letter, that she has faked her mental status in order to give herself time to think. It turns out that Sarah Byrnes' father caused her burns in a fight with her mother and that he has continued to abuse her all her childhood. Sarah Byrnes has noticed her father's cruelty growing and is afraid he is about to do something even worse than the burns he gave her as a child. Sarah Byrnes first considered suicide but then decided to go into the hospital to find another solution. Sarah Byrnes begs Moby not to go to an adult because she knows they will have to involve Child Protective Services. However, Sarah Byrnes is afraid her testimony against her father would never stand up in court because she was so young when the burns happened.

While Sarah Byrnes and Ms. Lemry are gone, Virgil Byrnes attacks Moby in an attempt to learn where Sarah Byrnes is. Moby is cut on the face and the knife is embedded in his back. Moby once again turns to Dale Thornton, who gets him medical help and becomes something of a hero in the papers. The attack on Moby gives the police a reason to arrest Virgil, but he has disappeared. Desperate, Sarah Byrnes decides to run away, but Moby and Ms. Lemry are able to stop her. Eventually Virgil Byrnes is arrested and convicted, and given twenty years in prison. Sarah Byrnes is adopted by Ms. Lemry and her husband, giving her a second chance at the happiness she was cheated out of by her biological parents.

More summaries and resources for teaching or studying Staying Fat for Sarah Byrnes.