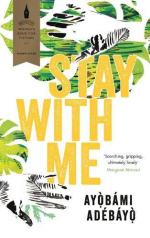 Stay With Me Summary & Study Guide

Ayobami Adebayo
This Study Guide consists of approximately 62 pages of chapter summaries, quotes, character analysis, themes, and more - everything you need to sharpen your knowledge of Stay With Me.

Stay With Me Summary & Study Guide includes comprehensive information and analysis to help you understand the book. This study guide contains the following sections:

This detailed literature summary also contains Quotes and a Free Quiz on Stay With Me by Ayobami Adebayo.

The following version of this book was used to create this study guide: Adebayo, Ayobami. Stay with Me. Great Britain: Canongate Books Ltd, 2017.

The novel is broken into four parts with 42 chapters in total, but for this guide. The story is told from the first-person perspective of two main characters Yejide and Akin. Mostly time moves forward from 1985 though each new part starts with a chapter from 2008 that then follows in chronological order.

Chapter 1 starts with Yejide’s perspective as she leaves her house in Jos, Nigeria in 2008. Chapter 2 jumps to 28 years prior in 1985 in Ilesa. Yejide’s step-mothers have brought Akin’s new second wife Funmi to her home. Yejide did not know about this visit or Funmi. Chapter 3 changes to Akin’s perspective as he recounts falling in love with Yejide and the intense pressure from his mother to reproduce. They have been married for four years, but have never gotten pregnant. In Chapter 4, Funmi visits Yejide at her salon and talks to her about the children they will have, and Yejide gets angry. The next day, in Chapter 5, Yejide visits her mother-in-law Moomi who has no sympathy for Yejide, and just wants a grandchild.

Chapters 6 to 9 explore Yejide’s false pregnancy. In Chapter 6, she climbs a mountain and visits a prophet who tells her she will be pregnant soon. In Chapter 7 she tells Akin she is pregnant but Akin refuses to believe her. In Chapter 8 she starts to have physical signs of pregnancy, though Akin still does not believe her, insinuating she has had an affair. In Chapter 9, two different doctors tell Yejide she has no baby in her womb. Yejide insists they are wrong, as she has a multitude of physical signs, even a swelling abdomen. She builds a playroom, and one day (when Yejide is 11 months pregnant), Funmi comes to the house insisting she move in and Yejide lets her.

Part 2 starts with Chapter 10, and Chapters 10 to 16 cover Yejide and Dotun’s first sexual encounter, Olamide’s birth, the robbery, and Funmi’s death. Chapter 10 starts from 2008 as Akin digs his father’s grave, and reunites with Dotun. Chapter 11 returns to 1987, and Akin decides he must get rid of Funmi. In Chapter 12 they receive a letter warning them of an impending robbery. In Chapter 13 Dotun and Yejide have sex while Akin is gone. In Chapter 14 the robbers come to the house and to them, Yejide gets pregnant, and Funmi moves in. In Chapter 15 Olamide is born, and soon after Yejide finds Funmi dead. In Chapter 16, Akin goes to church and thinks of how he accidentally murdered Funmi by pushing her down the stairs.

Chapters 25 to 30 detail Sesan’s death from sickle-cell disease and the birth of Rotimi. Chapter 25 details how Yejide met Dotun, and explains that she was a virgin when they married. In Chapter 26, the doctor tells Akin that he cannot biologically be Sesan’s father but Akin knows the truth since he asked Dotun to impregnate Yejide. In Chapters 27, 28, and 29 Sesan is in and out of the hospital, and Moomi approaches Yejide and Akin about the possibility of a curse. Sesan dies at the end of Chapter 29 and Yejide agrees to allow the countercurse performed. In Chapter 30, Rotimi is born and Part 2 ends with Akin walking in on Yejide and Dotun having sex.

Part 3 starts with Chapter 31 as Yejide arrives in Ilesa in 2008 for Akin’s father’s funeral. Chapter 32 changes back to 1992 as Akin walks in on Yejide and Dotun having sex and Akin beats Dotun. In Chapter 33 Yejide moves out of the room she shares with Akin. In Chapter 34 Dotun and Akin tell Moomi a story about why they fought. Dotun leaves Nigeria for Australia, and Yejide becomes disinterested in care for Rotimi. In Chapter 35 Yejide and Akin start splitting the care for Rotimi. In Chapter 36, they learn that Rotimi also has sickle-cell disease. Akin also relates the night Funmi died and reveals his reproductive problem - he is impotent. In Chapter 37, Yejide confronts him about his impotence, he admits it, and she and Iya Bolu go to Bauchi on a trip while Akin goes to Lagos with Rotimi. In Chapter 38 Akin waits for the election results, and realizes Rotimi is sick. In Chapter 39 he calls Yejide to tell him about Rotimi, but also that Lagos is falling apart over the election results, but she tells him he has to figure out a way to take her to the hospital. Yejide leaves Bauchi and gets on a bus to Jos alone.

Part 4 includes Chapters 40 to 42, and details Yejide’s return to Ilesa. The story jumps forward again to December 2008 as Yejide attends Akin’s father’s funeral. She notices a young woman wearing a crucifix, and realizes it is her daughter Rotimi - now called Timi. Iya Bolu had found Yejide in Jos and Rotimi had insisted on inviting Yejide to the event. Akin tells Yejide how Rotimi had survived - he had carried her to the hospital amidst the gunfire in Lagos. The novel ends with Yejide and Rotimi reconnecting, and Yejide thinking of the “promise of wonders to come” (296).

More summaries and resources for teaching or studying Stay With Me.

Stay With Me from BookRags. (c)2022 BookRags, Inc. All rights reserved.