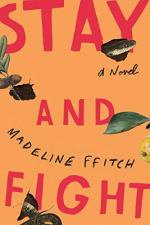 Madeline ffitch
This Study Guide consists of approximately 46 pages of chapter summaries, quotes, character analysis, themes, and more - everything you need to sharpen your knowledge of Stay and Fight.

This detailed literature summary also contains Quotes and a Free Quiz on Stay and Fight by Madeline ffitch.

The following version of this book was used to create the guide: ffitch, Madeline. Stay and Fight. Farrar, Straus and Giroux, 2019.

The novel opens with Helen recounting how she acquired her property in the Appalachians. Originally a college student from Seattle, she moved out to Ohio with her boyfriend Shane, where they bought a property together using Helen’s inheritance from her uncle and Shane’s earnings from working on an oil field. However, Shane left her after less than a year, leaving Helen to take care of the property by herself.

Helen began to work for her boyfriend’s former boss Rudy, felling trees to make money. Through Rudy, she met Karen and Lily, romantic partners living together on the Women’s Land Trust. Soon after, Lily gave birth to a baby boy, Perley. Male children are only allowed on the trust until the age of five, so Helen invited Karen and Lily to share the property with her, to which they reluctantly agreed.

As they began to build a house together, Lily realized that Helen and Karen were extremely similar. Specifically, they both enjoyed survivalism and living precariously. The house they eventually built was not very sturdy and let in many pests including black snakes, but lasted for many years. As Perley grew older, Karen taught him survival skills, Helen mostly ignored him, and Lily treated him gently. Perley grew older and started to express a desire to go to school. While Karen was extremely against the idea, Lily eventually convinced her to allow Perley to go to school. When there, however, Perley was bullied by the other children for being so different and unaccustomed to the urban environment of a school.

One night, Perley was bitten by a black snake in bed. At school, the principal and a teacher asked Perley how he was hurt. The principal and teacher called child welfare services, who then visited Lily and Helen at home and declared Lily an unfit parent. A social worker took Perley to live in foster care with Grandma Barlow, the grandmother of Altemonte, another child who experienced bullied at school.

Perley and Altemonte developed a friendship as the three women and Rudy made a plan to get Perley back. Rudy asked his friend Aldi, a lawyer, to represent them. In exchange, Rudy and Helen decided to fell the white oak tree in Aldi’s front yard, which Rudy claimed could fall at any time and hurt Aldi. Meanwhile, Lily decided to follow the proposed reunification plan to the letter, which included cleaning up the house and installing a septic system within ninety days, which would cost fifteen thousand dollars. Karen decided to leave to work up north on an oil field for Shane, Helen’s old boyfriend, in hopes of making fifteen thousand dollars within the required time frame.

While working up north, Karen discovered that the pipeline she was building was set to be built straight through her property. Her fellow workers were all Indigenous, but after one left for family reasons, he was replaced by a racist white man. In the end, the man's violent racism against an Indigenous woman teammate prompted Karen to walk off the job and steal supplies from Walmart to sabotage the pipeline’s recently-built compressor center.

Upon her return, Karen told Lily and Helen that she had made almost enough money for a septic system. She returned just in time to participate in a snake-banishing ritual which Perley heard from Grandma Barlow and shared with Lily during a supervised visit. Late that night, Karen went out to bury the snake heads used in the ritual.

Meanwhile, at Grandma Barlow’s house, Perley snuck out of the house with Altemonte. They went so far that they ended up back on Perley’s home property. Altemonte returned home, while Perley went out onto the ridge and was reunited with Karen.

More summaries and resources for teaching or studying Stay and Fight.