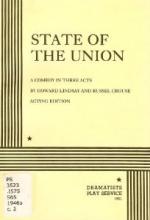 State of the Union Characters

Howard Lindsay
This Study Guide consists of approximately 33 pages of chapter summaries, quotes, character analysis, themes, and more - everything you need to sharpen your knowledge of State of the Union.

Judge Alexander is the husband of Lulubelle Alexander and a prominent Southern Republican who attends the Matthews's dinner party. He spends much of the time before dinner fixing drinks for his wife, Lulubelle, and Mary Matthews. The judge has been stuck in the same state judicial appointment for years, and he hopes that if Grant gets elected, he will appoint the judge to a federal position. In fact, he goes so far as to give Grant a list of the major decisions that he has made in his time on the state bench, to try to sway Grant's mind.

Lulubelle is the wife of Judge Jefferson Alexander and a guest at the Matthews's dinner party. Because Lulubelle does not trust anybody else to make her Sazaracspotent cocktailsshe has her husband do it. Lulubelle and Mary Matthews spend most of the...

More summaries and resources for teaching or studying State of the Union.

State of the Union from Gale. ©2005-2006 Thomson Gale, a part of the Thomson Corporation. All rights reserved.