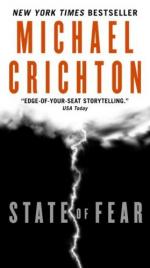 Fear as a Means of Social Control

Crichton takes the title of his novel from this global theme. He develops the notion of the PLM (Politico-Legal-Media) Complex to illustrate his belief that powerful organizations (i.e., governments, churches, ruling families, etc.) must generate fear in the populace - even if no real threat exists - to maintain civility and social order. When people are always looking over their shoulder, waiting for the impending crisis, they have little time for revolt and other mischief. He makes his case with historical examples, such as the Military-Industrial Complex Eisenhower warned us about, and the Y2K scare. The Military-Industrial Complex may indeed have been a genuine threat - one that powerful forces ultimately excised from Eisenhower's speech; while the Y2K scare may have been pure fraud, similar to global warming as Crichton sees it.

People are quick to...