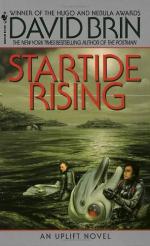 David Brin
This Study Guide consists of approximately 72 pages of chapter summaries, quotes, character analysis, themes, and more - everything you need to sharpen your knowledge of Startide Rising.

This detailed literature summary also contains Topics for Discussion and a Free Quiz on Startide Rising by David Brin.

Startide Rising by David Brin is the story of an exploration vessel from Earth, commanded and crewed by neo-dolphins, having to make repairs on an obscure water planet while Galactic fleets fight overhead to obtain its secrets.

The exploration vessel Streaker, commanded and crewed by neo-dolphins, lands on the water world Kithrup to make emergency repairs. A massive battle breaks out overhead, pinning them. Streaker carries a contingent of natural scientists whose explorations yield a wealth of data about two unknown species. The crash of an alien warship nearby creates a tsunami that rattles the neo-dolphins' nerves, but Tom Orley proposes using the hulk as a "Trojan Seahorse." While he is away preparing a diversion and his lover, Dr. Gillian Baskin, is overseeing science, mutiny brews and Captain Creideiki is electrocuted. As he recovers, Creideiki receives an epiphany from the whale gods, which prepares him to speak with the voice of the island.

As Creideiki's successors cancel Tom's plan, Gillian invokes secret orders to seize command. The rebels go into exile on the island, to be left behind as the Trojan Seahorse is played out. They control a longboat capable of limited space travel. When Tom detonates a psi-bomb, the wave is felt around the planet and in space, where the Thennanin are convinced that their crashed ship has survived. Aliens converge to find the source of the bomb. Meanwhile, Stenos' neo-dolphins reveal bloodthirsty tendencies.

Changing alliances in space facilitate the Trojan Seahorse plan. Creideiki fails in his appeal to the Karrank% to help divert the common enemies, but the tormented creature eventually lets out a massive psi-wave that disrupts the warfare and rids the planet of combatants. Dr. Metz, the crazed dolphins' creator becomes their first human victim. Rebel Takkata-Jim flees in the longboat and is quickly killed. Streaker also launches, stranding the island party and Tom. Sharp maneuvering and an ambush of pursuing aliens gets it to safety at a transfer point, whence it begins the trip home. The other survivors board a small skiff and head home, less assured of their survival.

More summaries and resources for teaching or studying Startide Rising.