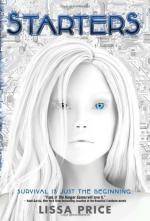 Lissa Price
This Study Guide consists of approximately 54 pages of chapter summaries, quotes, character analysis, themes, and more - everything you need to sharpen your knowledge of Starters.

Starters by Lissa Price is a fictional story that examines both the heavy cost of war, and our pursuit of youth at any cost. A world war is the catalyst that creates a gulf in the ages of its survivors. A war waged using the smallest of spores kills all of the middle aged population, leaving only the children and their grandparents behind. A law passed earlier forbids minors from employment and this law will make their survival a challenge at best. Children without the benefit of grandparents are rounded up by Marshals and placed in homes or work camps, while those who escape the Marshal's clutches live hand to mouth, sleeping in abandoned buildings and doing whatever is necessary to survive.

Callie and her younger brother Tyler are two such children. When their mother first becomes sick, they take her to an infirmary where she dies just two days later. The Marshals come for their father shortly thereafter, and when he realizes that they won't release him, he sends his children a coded message to run, saving them from incarceration. Tyler becomes sick, and with no access to health care, and poor diet, he gets steadily worse. Another refugee of the war, their friend Michael, offers to look after Tyler while Callie investigates the one opportunity she has to make enough money to help her brother. She walks for hours to get to Prime Destinations where she is received graciously. The program is outlined for her, and a substantial stipend offered for what seems like a very short investment of time. She takes the contract back to Michael, intending to think it through carefully like her father taught her, but when Marshals invade the building where they are living and put them out on the street again, Callie realizes she has no choice. She returns to Prime. For just three rentals, she will have enough money to get herself, Tyler and Michael a real home. She signs, and is immediately put through their treatment program - washed, disinfected, hair cut and styled, manicured, scars and blemishes removed, make up added and new clothes issued. When she is presentable, she hardly recognizes the beautiful girl who looks back at her. A night in a real bed follows, and she wakes the next morning to be taken for the procedure that will install a chip in her head. This chip will allow an Ender, one of the senior population, to enter and control her consciousness and body as though it were her own. Meanwhile, Callie's consciousness sleeps comfortably in Prime, she is told. Most of the hype is true, and Callie comes through the first two rentals with ease. She is immediately asked to go on to the third which is a month in duration. She makes a deal to see her brother and Michael first, taking them food and explaining her absence. Tyler misses her, and she promises it will all be worth it. The third rental changes everything. Shortly after relinquishing control of her body, she returns to it, finding herself in a place called Club Rune, where the music is loud and the crowd is young and beautiful. Something has allowed her and the renter named Helena to communicate and Helena opens Callie's eyes to the truth. Prime is taking children off the street and indenturing them into service. At first, Callie doesn't want to believe what her renter is telling her. Helena insists that she is seeking her granddaughter Emma, and she is not alone. She introduces her to others who believe Prime has taken their family members as well. In the quest for youth, the renters never even question the identity or cost of rental to the donor. Callie is really rattled when she discovers that Prime is preparing a new program in which a renter can become an owner of their youthful rental. The donor would, of course, cease to exist in any meaningful way. Callie joins and spearheads the crusade to end Prime Destinations once and for all, but in a twist she can't anticipate, she meets Blake Harrison - Senator Harrison's grandson. They date, Callie swallowing the guilt she feels for her deception, and she falls for him. It is her first date, her first crush, and her first heartbreak, all rolled into one. How can she possibly stop Prime, help her brother and Michael, and avenge the deaths of so many who precede her? Starters is a gripping tale with carrots and consequences that is hard to put down.

More summaries and resources for teaching or studying Starters.