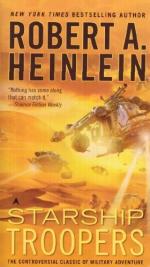 Robert A. Heinlein
This Study Guide consists of approximately 53 pages of chapter summaries, quotes, character analysis, themes, and more - everything you need to sharpen your knowledge of Starship Troopers.

This detailed literature summary also contains Topics for Discussion and a Free Quiz on Starship Troopers by Robert A. Heinlein.

Starship Troopers tells the story of Juan Rico, a well-to-do youngster who joins the elite Mobile Army at the outbreak of the “Bug War”. He survives boot camp, rises rapidly through the enlisted ranks through heavy attrition, is culled off for Officer Training School, and survives his first experience as a platoon commander. Rico goes on to become a confident commander, passing to younger officers the wisdom he has absorbed from many mentors.

First published in 1959 and set in the distant future when intergalactic space flight and warfare are commonplace, Robert A. Heinlein’s Starship Troopers is presented as the highly selective reminiscences of Juan Rico who, right out of high school and over his father’s objections, gives up a sure fast track to the top in business to join the elite Mobile Infantry. Rico tells of narrowly surviving the rigors and frustrations of boot camp, almost miraculously surviving a first taste of combat in which over half his comrades perish, and joining one of the Mobile Army’s most elite units as a corporal, having been promoted rather quickly because casualties in the Table of Organization above him are so incredibly heavy.

Humankind, which has colonized the Solar System and expanded to galaxies beyond, has clashed with rival colonizing races, the most menacing being the highly evolved, antlike “Bugs.” Only after Rico signs up and begins boot camp does active warfare break out, ending a long period of peace that people mistake for a permanent state of being. Two-year enlistments, which entitle those who complete them honorably to exercise full citizenship, become open-ended. Human civilization in Rico’s day represents a cleansing and evolution of naïve, overly humanistic 20th century Western societies. At the end of his training, Rico realizes how far he has come, psychologically and physically, since leaving civilian life.

Still, the trained soldier, Cpl. Rico remains painfully modest and brutally frank about his intellectual shortcomings and fails to pick up on his Mobile Infantry superiors’ desire to sign him up for Officers Candidate School. They use an older, less educated comrade to drop the bait that Rico appears not to take, thinking how rank has far more pitfalls than it has privileges. Nevertheless, without explanation, Rico heads off to OCS, where the curriculum provides opportunities to contemplate, in greater detail, the development of the political and military institutions of Rico’s day. Rico is sent as a temporary “third lieutenant” on a “‘prentice cruise” that will determine whether he receives a permanent commission, is returned to the rank of buck sergeant, or is cashiered out of the Mobile Infantry completely.

First aboard a transport ship en route to a crucial battle with the Bugs and then in nominal command of a platoon on the ground, Rico obsesses about his own greenness, the way his Captain tries to help him figure out how to grow into a true leader. Eventually, though, the Captain quietly colludes with the experienced Platoon Sergeant he assigns to Rico, to leave him with little more than a figurehead role. Still, Rico does his best in a harried situation as Bugs suddenly pour out of their underground nest and half of Rico’s men disappear underground without authorization. Leading a rescue mission, Rico is wounded in an ignoble accident and evacuated to a hospital transport, where he has time to contemplate his shortcomings as a commander. He appears genuinely surprised when he does not wash out of OCS, but graduates and is commissioned. Rico happily returns to his old unit.

The novel ends with a short epilog showing Rico as a mature officer passing on to an anxious, green apprentice some of the wisdom he has absorbed from his many valued mentors. Rico still gets the shakes, however, before every combat drop.

More summaries and resources for teaching or studying Starship Troopers.