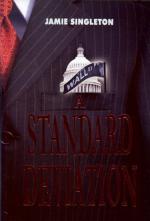 This Study Guide consists of approximately 34 pages of chapter summaries, quotes, character analysis, themes, and more - everything you need to sharpen your knowledge of Standard deviation.

This detailed literature summary also contains Quotes and a Free Quiz on Standard deviation by .

The following version of this book was sued to create this study guide: Heiny, Katherine. Standard Deviation. New York: Alfred A. Knopf, 2017.

The novel opens in New York City. Graham is a medical venture capitalist in his fifties. He is married to Audra, a freelance graphic designer who is about 15 years younger than Graham. Audra is extremely outgoing, while Graham is generally reserved. Their ten-year-old son, Matthew, has Asperger syndrome. One day, Graham happens to encounter his ex-wife, Elspeth, in a deli. Graham’s relationship with his wife Audra had begun as an affair when Graham was still married to Elspeth. In the deli, Graham and Elspeth politely converse for a few minutes before parting ways. Elspeth is generally reserved and cold toward others.

Graham and Audra decide to ask Elspeth and her new boyfriend Berntrup on a double date. They go to Elspeth and Berntrup’s apartment for dinner. Although Elspeth does not seem to like Audra, the dinner proceeds without incident. The two couples continue to go on more double dates. However, when Berntrup leaves Elspeth for another woman, Elspeth no longer wishes to spend time with Audra and Graham. Meanwhile, Matthew, who is very interested in origami, attends an origami club meeting. The other members are all adults.

One day, Graham finds a piece of paper in Audra’s purse that has a phone number and the name Jasper on it. He becomes worried that Audra is having an affair. Graham and Audra take Matthew to an origami convention. While there, Graham calls the phone number, and a man answers the phone. Graham loses his nerve to press for information, and he hangs up. For Thanksgiving, Audra invites several guests to her and Graham’s apartment. One of the guests is Elspeth. By the end of the night, Graham wants to have a closer, yet still platonic, relationship with Elspeth.

Graham soon confronts Audra about Jasper. Audra admits that she had flirted with Jasper and that the flirtation had gotten a little out of control. However, she and Jasper had not engaged in any sexual activity. Graham begins to secretly visit Elspeth at her apartment. They drink and talk, but they are not intimate. Eventually, Elspeth invites Graham to have sex with her. At first, he agrees. Then, he remembers the things he does not like about her. He goes home without having sex with Elspeth, and he forgives Audra for flirting with Jasper.

Graham and Audra have make-up sex, and Audra soon thinks that she may be pregnant. Graham has fears about having another child because of Matthew's autism. Having a second child is not a fear for Audra. A pregnancy test soon reveals that she is not pregnant. Meanwhile, Matthew is disciplined by his school for looking at pornography on a school computer. His friend Derek was an accomplice. Derek is known as a troublemaker. Graham and Audra reprimand Matthew. Graham eventually receives a phone call informing him of Elsepth’s death. She tripped in the shower and fell. Graham and Audra go to Elspeth’s funeral, which is sparsely attended.

Derek decides that he no longer wishes to spend time with Matthew, and Matthew is deeply upset by losing Derek's friendship. Audra tries to repair the relationship by taking Graham and the two boys on a fishing trip. The ploy does not work. However, Matthew soon begins to move on from his feeling of loss. This pleases Graham and Audra. They are also happy with the secure nature of their relationship with each other.

More summaries and resources for teaching or studying Standard deviation.