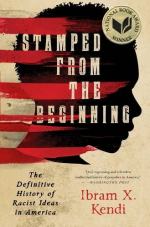 Stamped From the Beginning Summary & Study Guide includes comprehensive information and analysis to help you understand the book. This study guide contains the following sections:

This detailed literature summary also contains Topics for Discussion on Stamped From the Beginning by Ibram X. Kendi.

The following version of this book was used to create this study guide: Kendi, Ibram X. Stamped From The Beginning: The Definitive History of Racist Ideas in America. Nation Books, 2016. Paperback Edition.

Stamped From The Beginning: The Definive History of Racist Ideas in America opens with a preface in the paperback edition. This addition address the change in political climate from the time of original hardcover publication to the printing of the paperback. In this time, President Barack Obama was replaced by President Donald Trump, the “candidate of angry bigots” (ix).

The prologue addresses the historical moment in which Stamped From The Beginning was written. It outlines Kendi’s belief that racist and antiracist ideas have both evolved together throughout history. This is in opposition to the common belief that society is constantly moving away from racism toward antiracism. Kendi also introduces the key three groups on the side of the racial debate: segregationists, assimilationists, and antiracists. These groups and their differing ideologies will continue to recur through the manuscript. Kendi argues that racist ideology is any thought process which presents one group, as a whole, to be inferior to others.

Part One focuses on the early colonial period in America but also flashes back to the birth of racist thought in Antiquity and the start of the African slave trade in the Middle Ages. It addresses how laws supporting slavery were written into American constitutions and it also examines different pseudo-scientific theories and religious ideologies which propagate the belief in racial inequalities. In this section, Kendi also explains how many racial stereotypes were born and perpetuated in America’s early days.

Part Two introduces more assimilationist thoughts and Enlightenment Era ideas about race. The assimilationist ideology, as Kendi explains, promoted the idea that Black people could be “improved” by adopting White culture. This is the main idea behind the tactic of uplift suasion in which Black people are required to demonstrate their “capability for equality” (121). Kendi stresses that the idea that one group should have to prove their equality or should adopt the cultural traditions of the dominant group is racist. While assimilationists may advocate emancipation, their philosophies are not truly antiracist. Part Two uses the hypocrisy of politician and slave owner Thomas Jefferson to demonstrate that slavery in America is less a moral question but a question of economic interest.

Part Three goes into further detail on emancipation as abolitionist movements gain ground in the nineteenth century. It takes readers through Abraham Lincoln’s early political career and the Civil War era with an emphasis on clarifying Lincoln’s true position on race and slavery. Kendi emphasises that Lincoln’s primary motivation was to keep the Union together by any means necessary, not to address the issue of slavery. The end of this section discusses how the post-Civil War Reconstruction period set policies in place which would keep emancipated Black people in positions of disempowerment and social inequity.

Part Four covers the long period of Jim Crow laws and segregation as well as the early days of the Civil Rights movement. Kendi addresses the lynching era and the continued American narrative of the “Negro problem” (279). Kendi discusses how racist ideologies have persisted and reinforced negative stereotypes about the Black population. He introduces the idea of media suasion in which new forms of entertainment such as film were used “to persuade away racist ideas” (323). However, Kendi provides examples of popular culture which did more to reinforce racial stereotypes than dissuade them. Kendi also addresses how early 20th century economics and politics ended up keeping the Black population in disenfranchised positions. For example, segregationists in charge of state governments were able to prevent the benefits of the New Deal and the post WWII GI Bill from reaching Black communities. Readers see how these government benefits, which birthed the White middle class in the mid-20th century, were excluded from Black people due to racist ideology and White self-interest.

In Part Five, readers are taken through the key years of the Civil Rights movement and into the Black Power movement. Kendi emphasizes the importance of Black communities having power of their own local governance and of rediscovering their own culture, separate from the dominant White culture. Kendi also discusses the influence of more recent popular culture such as the films of Spike Lee and rap music. He addresses the human genome project which, in the 1990s, finally settled the question of racial difference by determining that, in genetic terms, humans are all the same. The later portion of his section discusses the Obama era and emphasizes that the election of a Black president does not mean that America is living in a post-racial society.

In the epilogue, Kendi emphasizes the myth of post-racialism and discusses contemporary antiracist movements such as Black Lives Matter. Kendi offers suggestions for how to undermine racial discrimination. He believes that “any effective solution to eradicating American racism must involve Americans committed to antiracist policies seizing and maintaining power over institutions, neighborhoods, counties, states, nations—the world” (510).