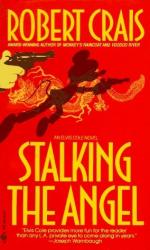 Robert Crais
This Study Guide consists of approximately 38 pages of chapter summaries, quotes, character analysis, themes, and more - everything you need to sharpen your knowledge of Stalking the Angel.

This detailed literature summary also contains Topics for Discussion and a Free Quiz on Stalking the Angel by Robert Crais.

Elvis Cole is a private detective in Los Angeles, California and has been in the business a long time. Cole is humorous, charming, sharp witted and appreciates the innocence of childhood. He surrounds himself with cartoon paraphernalia and indulges in life and food as if he is still a kid. Cole is good at what he does and has formed strong friendships in helpful places, like the Los Angeles Police Department. Cole has been hired by a wealthy businessman named Bradley Warren to find a stolen manuscript. The manuscript is a priceless, ancient Japanese artifact that was in Bradley's care when it was stolen. Cole follows many leads and clues with hopes of finding the Hagakure but his digging causes Bradley's daughter, Mimi to get kidnapped. Bradley blames Cole for losing Mimi and fires him. Cole has a connection with children and is determined to save Mimi from a terrible fate despite being fired from the case.

Cole's search leads him to an Asian gang called the yakuza, known for drug trafficking and organized crime. It is a gang that Cole initially suspected of stealing the Hagakure. Now, he looks to them first for answers about Mimi's whereabouts. Cole finds a link between Mimi and the yakuza through one of its members, Eddie Tang. Eddie is moving up in the ranks of the yakuza but is also Mimi's secret boyfriend.

Cole learns that Mimi staged her kidnapping when he finds her hanging out at a club with Eddie. He follows her to get answers and chaos unfolds. Cole follows Mimi to the home of a former Japanese artist, Kira Asano, who takes in youth to teach them a new way of life. He once ran a movement of young people who lived the way of the ancient Japanese and the samurai. Mimi escapes to Asano's with the Hagakure to get far away from her parents. In the Warren home, Mimi is completely ignored by her father who can't think beyond money and business and her mother who spends all her time drinking, sleeping with strange men and ranting about Bradley.

Mimi manipulates Cole when he confronts her at Asano's. She leads him to believe that she needs to stay at Asano's because Bradley is molesting her at home. While Cole leaves to find Mimi help with a social worker friend, Mimi sets a plan in motion to get away for good. Eddie has already killed a fellow yakuza, Nobu Ishida, to keep him away from Mimi and the Hagakure, so he has no problem doing the same to Asano to get Mimi out. Mimi also decides she will get rid of her father for good and shoots him in person. Cole still feels as though he needs to end the chaos and find Mimi. Cole and his partner, Joe Pike, follow Mimi and Eddie to a mansion owned by the yakuza, They have to kill Eddie and everyone at the house in order to get Mimi out. She is charged with the murder of her father and ordered for psychiatric care.