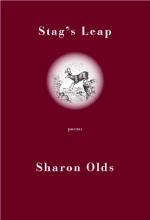 Sharon Olds
This Study Guide consists of approximately 46 pages of chapter summaries, quotes, character analysis, themes, and more - everything you need to sharpen your knowledge of Stag's Leap.

The following version of this book was used to create this study guide: Olds, Sharon. Stag's Leap. Alfred A. Knopf, 2012.

Though organized into temporal sections, beginning with “January-December,” the collection does not subscribe to a strict linear narrative arc. The speaker instead surrenders to recollections when they arrive and recounts events in the settings in which they occurred. The sections, rather than serving as a calendar for a fictional year, address associated themes and images. Moving fluidly between the past and the present, Olds subverts linear, orderly conventions of time for the sake of poetic association.

From the opening poem, “While He Told Me,” the first section, “January-December” addresses the dichotomies of disclosing and obscuring, revealing and concealing. In portraying her husband’s unnamed divulgence, the poem performs what it describes, veiling the contents of his confession from the readers. As the section unfolds, it gestures towards the contents of his first disclosure: his burgeoning affair with a doctor colleague. The speaker begins to grieve for, and vivisect, her dying marriage, visiting her childhood coastal home to tell her mother the news of her husband’s abandonment. As her husband takes her to the airport and she exits the car, she likens herself to a survivor of a car, submerged in water: this introduces themes of love as a sort of submersion. The section also contains the titular poem “Stag’s Leap,” which, as the epigraph notes, alludes to the label of their favorite red wine. The image of the stag resonates with her husband’s post-conjugal freedom; however, the poems disrupt the binary of leaving and being left, as the speaker “feels half on the side of the leaver” (16).

“Winter” inhabits a space of negation, opening with the poem “Not Going to Him,” which portrays the speaker’s attempts to prevent herself from returning to her husband, both physically and in memory. She surrenders to visceral memories of her husband’s form, mapping the memories of his body as a remembered country, as in “Frontis Nulla Fides,” while also addressing the inability to accurately represent a partner, and the inadequacy of knowledge that claims fixity and verisimilitude. This resonates with her recollections of her husband’s homeland, Greenland, a nation over which his memory still presides (39). “Spring” explores the fragmentation of the speaker’s self, which has begun to come to terms with her husband’s absence, and her body, which still desires erotic consummation. The speaker also directly addresses their miscarried child in “To Our Miscarried One, Age Thirty Now,” grappling with divisions between life and death, and reworking the death of her marriage into a potential site of regenerative artistic growth.

In “Summer,” the speaker returns to their shared coastal rental property, at which, one year before, she discovered a forgotten picture of her husband’s lover in the washing machine. The section addresses themes of consumption, at times carnal and exploitative (as in the poem “Attempted Banquet,”) and at others, nourishing and sustaining (58-9). “Fall” portrays images of harvest, as the speaker gleans from the unkempt fields of her marriage. The section contains the only reference to the speaker’s name, Sharon, in the poem “Bruise Ghazal” (67). The final section, “Years Later,” returns to images of her now ex-husband from the clarity of time and distance, describing later meetings of the pair, as his figure gradually exerts less power and weight on the speaker (notable in the poem “Slowly He Starts,” [75]). Concluding with the chiastic poem “What Left?,” the speaker depicts the transience of being, expressed in imagery of elemental exchange, subverting the borders between loss and gain, possession and release: “I freed him, he freed me” (89).

More summaries and resources for teaching or studying Stag's Leap.