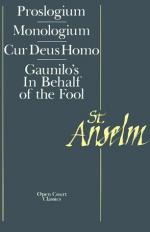 St. Anselm
This Study Guide consists of approximately 29 pages of chapter summaries, quotes, character analysis, themes, and more - everything you need to sharpen your knowledge of St. Anselm.

St. Anselm of Canterbury (1033 - 1109) is one of the most important philosophers in history, and among the five most prominent medieval philosophers, which also include (at least) St. Augustine, Duns Scotus, St. Thomas Aquinas and William of Ockham. Anselm's Basic Writings is a book which purports to prove the most basic doctrines of Christianity - the God exists, that He is a Trinity, that He is omnibenevolent, omniscient and omnipotent, that He sent His son Jesus Christ to die for the sins of humanity and thereby reconcile fallen humanity to eternal life in God's Kingdom. Anselm wrote several books on these matters and the most important three are reproduced here.

Anselm first wrote the Monologium (also known as Monologion) in order to prove not only the God exists, but that He has all the properties Christians attribute to Him, in particular that He is a trinity. The argument proceeds in great detail, but later, Anselm found himself dissatisfied with the complexity of the argument. Following Psalm 14, v. I, which says, "The fool says in his heart 'There is no God'," Anselm believed that it should be a simple matter to demonstrate God's existence. He wrote the Proslogium (also known as Proslogion) for this reason. In it, he gives one of the most famous arguments in the history of philosophy - the ontological argument for God's existence. Anselm's argument is complex and is often misunderstood by his critics (particularly his nineteenth and twentieth century critics). But, to state it briefly, Anselm argues that the very definition of God entails that He exists and that He exists necessarily. This argument has been endlessly controversial throughout the history of philosophy, garnering the criticisms of St. Thomas Aquinas, Rene Descartes, Immanuel Kant, G.W.F. Hegel and perhaps most of history's great philosophical minds following the eleventh century. The book also includes a famous criticism of Anselm's ontological argument, given during his life by a fellow priest known as Gaunilo; Anselm's reply to Gaunilo is included as well.

But between the Monologium and Gaunilo's criticism, the authors have placed another of Anselm's most important works, Cur Deus Homo or "Why God Became Man." Believing that he had decisively established not only that God exists, has the standard properties attributed to him by Christians, including that He is a trinity, Anselm proceeds to vindicate the claim that the birth, crucifixion and resurrection of Christ was necessary for humanity to atone for its sins and be reunited with its Creator, God the Father. The entire book is an extended dialogue between Anselm and an interlocutor, Boso. Boso is a Christian but he worries that the Christian understanding of the atonement doesn't make sense. So Anselm takes him through an extended argument that only the death of a being who was simultaneously God and man (as Christians claim Jesus was) could reunite humanity with God. These three books, along with Gaunilo's criticism and Anselm's reply, constitute one of the most detailed philosophical attempts to defend a religion in history, and are classics in the history of philosophy.