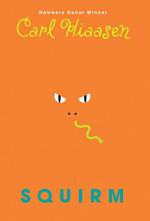 This detailed literature summary also contains Quotes and a Free Quiz on Squirm by Carl Hiaasen.

Billy Audubon Dickens, the narrative’s protagonist and narrator, lives with his mother, Christine, and sister, Belinda, in Florida. His father, Dennis, left the family when Billy was a young boy and Billy has not had any contact with him since then. However, every month, a check comes from Dennis that allows Billy and his family to live a comfortable life. When the check arrives, Billy always tries to see the return address in an attempt to learn his father's whereabouts, however, his mother tears the envelope in such small pieces that he is unable to retrieve the return address. One day, the check arrives and Billy’s mother leaves the pieces of the envelope big enough for Billy to be able to piece it together and discover that his father lives in Montana. He books a flight to see him. His mother is apprehensive, but allows him to go and even has someone meet him at the airport and take him to his father's house.

Dennis is not home when Billy arrives, but Summer, the girl Billy discovers is his stepsister, greets him. Later Summer’s mother, Lil, returns home from her job as a professional trout guide. Lil and Summer say that they do not know what Dennis does exactly, but he has told them that he works for a secret arm of the government. They welcome Billy in their home while he waits for his father’s return. One day when, they return home from an outing, a patrolman is at the house. He has found the car Dennis was driving. Someone has slashed some of the tires. When Summer, Lil and Billy go to fix it, Billy wanders away from Summer and Lil. While he is in the wilderness alone, he sees a grizzly bear and her cubs. He also gets a message from Dennis via a drone telling him to get away because it is dangerous there. Dennis also apologizes for all of the years they here not seen each other. The note both angers and saddens Billy. He waits for his father to appear, but he does not. Billy eventually rejoins Summer and Lil.

The next day, the trio goes to Yellowstone National Park. On his final day in Montana, the drone finds the trio on the water. This time Billy gets a note from Dennis saying that he will see him in Florida and containing what his father says is the first tooth Billy lost.

Billy goes back to Florida. He has a summer job working at the grocery store, Publix. One day he sees a boy who he saved from bullies near the end of the school year. He also realizes that his father has found his family because both he and his mother see a drone. Billy is outside with his slingshot when he sees the drone. He uses it to bring the drone down. This act allows him to trace his fattier. When the two come face to face, his father tells Billy what he really does, which is prevent poachers from killing endangered species. Billy promises to keep his secret as long as Dennis takes him with him on his latest mission, to stop a man named Lincoln Baxter from killing a Florida panther. Before they leave, Dennis goes to visit Belinda and Christine. After convincing Christine to let Billy come on a camping trip with him, Dennis and Billy go to stop Baxter, but not before picking up Summer at the airport. She has come because she and Lil are a little worried that Dennis might not return. The trio manages to stop Baxter from killing the panther, but then discover that he is returning to Montana. Dennis thinks that he is going to kill the grizzly He kept him from killing when Billy was in Montana. Billy’s theory is that Baxter is after Dennis.

During his visit, Dennis suggested that Billy, Belinda, and Christine come to Montana. Unbeknownst to him, Christine and Lil hare made plans for them to do so. They go to Montana and the two families get along well with each other, but when Billy realizes that Baxter is in the area Lil, who has secretly known about Dennis' activities for a long time, says-that the place is not safe for Belinda, Billy, and Christine. They invent a reason to end the visit. Billy, however, manages to get off the plane and returns to Dennis' house. When he gets there, he and Summer mange to save Dennis' life as Baxter is using him as bait to catch the grizzly bear. Baxter disappears and the popular theory is that he is dead. Dennis establishes regular contact with Billy and Christine, who has to live within 15 minutes of an eagle’s nest, realizes that the eagles they currently live near have not left and the family stays in their home.