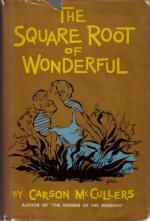 Carson McCullers
This Study Guide consists of approximately 46 pages of chapter summaries, quotes, character analysis, themes, and more - everything you need to sharpen your knowledge of The Square Root of Wonderful.

Act 1 begins after midnight in the living room. Mollie Lovejoy awakens and comforts her thirteenyear- old son, Paris, who has been having a nightmare in which his father, Phillip Lovejoy, is a burglar. Paris is sleeping on the couch because his grandmother, Mother Lovejoy, and his aunt, Loreena Lovejoy, also known as Sister, are visiting.

Mollie and John Tucker, an architect who is living at the house, have been in the kitchen talking and drinking tea. Mollie says that she will be "desolate" when John leaves. When Paris asks the architect, "Why do you keep your arms around my mother? Why do you look at her in that zany way?" John admits that he loves Mollie. Mollie has been divorced twice from Paris's father.

Mollie has received a phone call from Phillip and is worried that he is going to show up at the house, having checked...

More summaries and resources for teaching or studying The Square Root of Wonderful.

The Square Root of Wonderful from Gale. ©2005-2006 Thomson Gale, a part of the Thomson Corporation. All rights reserved.