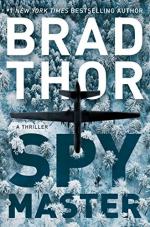 Brad Thor
This Study Guide consists of approximately 40 pages of chapter summaries, quotes, character analysis, themes, and more - everything you need to sharpen your knowledge of Spymaster.

This detailed literature summary also contains Quotes and a Free Quiz on Spymaster by Brad Thor.

The American intelligence agent Scot Harvath is an incredibly skilled member of the Carlton Group, a secretive group that operates on behalf of the American government more swiftly than the CIA is capable of acting. Harvath has been tasked with identifying and disrupting cells of Russian agitators who have become embedded across many different Western European countries. The Russians' objective, led by Oleg Tretyakov (whose identity is unknown to Harvath) is to trigger a small-scale war with one of the European countries who has entered the NATO agreement with the United States. This would legally obligate the USA to enter a war on behalf of the NATO allies. Harvath's intention is to find a way, however violent in the short-term, to prevent this sort of larger conflict from happening.

The novel begins as Harvath approaches, with the Norwegian military, a cabin in the Norwegian wilderness which holds a cell of Russians. After a firefight, each of the Russians are killed. After, Harvath is approached with many questions by Monika Jasinski, a member of the Polish intelligence community, who accompanied him on the mission. Harvath takes Jasinski back to his team's temporary base, in a house in Belgium, and fills her in on their plans to move next to the geographically crucial island of Gotland, Sweden, to destroy a Russian cell there. Meantime, the director of the Carlton Group, Lydia Ryan, in Washington, D.C., enlists the help of her own Polish contact, Artur Kopec, to help track down a shipment of American missiles that had been stolen in Poland.

Harvath introduces Jasinski to the other half-dozen members of his elite team as they fly to Gotland. When they arrive, they discover that their contact there, Lars Lund, has been mysteriously killed in a car accident earlier that day. Harvath goes with the police to identify Lund's body at the local hospital, and the rest of the team sets up operations in another rental house. The team begins surveillance on the farm of Steffan Sparrman, the adult son of a local politician, who is known to be harboring the Russian cell. At this same time, a Russian bomber detonates a bomb in a fancy, crowded restaurant in Rome, Italy, which in turn increases the pressure that team receives from Washington, D.C. to successfully complete the mission.

After a day of no activity on the Sparrman farm, he and a group of Russian men drive to a bar in the local town, trailed by Harvath and company. Jasinski and the only other female member of the team, Sloane Ashby, flirt with Sparrman. They eventually lure him into the parking lot, where he is then restrained by Harvath, and taken back to the house, where Harvath begins to torture him. Sparrman eventually gives up the name Dominik Gashi, which is the alias of Ivan Kuznetsov, who is the Russian leader of the cell. Harvath and the team approach Gashi's house with guns drawn, but find that it is empty.

However, inside, the team sees the address of a house where Gashi, as part of his alias, is working as a house-sitter. Harvath, dressed in a police uniform, approaches the house along with another, actual Gotland policeman (whom the team had met earlier), acting as if they had received a noise complaint. Gashi, along with several other men inside, figure that something is amiss, as they instigate a firefight, with the rest of Harvath's team returning fire from around the house. The team is able to capture Gashi/Kuznetsov alive. He is willing to give up information about his own superiors if he and his family are granted asylum, a deal that is agreed to by the US President back in Washington, DC.

Harvath learns, from Kuznetsov, the identity of Oleg Tretyakov, as well as his location, which is in the Russian exclave of Kaliningrad. (Meaning: Kaliningrad is located entirely outside the main boundaries of Russia, and is located between Poland and Lithuania.) With the help of the Lithuanian government, Harvath and his team hatch a plan to split in half, with Harvath's half parachuting into Kaliningrad from Lithuania with the intent of capturing Tretyakov. The other half would prepare, from the Polish side of a lake that borders Kaliningrad, to extract the team once their mission was complete. Harvath observes Tretyakov's apartment from a perch across the street and, when he sees the Russian begin to walk to work, he decides to follow him.

Harvath trails Tretyakov until Tretyakov sits down in a bench in a peaceful park in the middle of Kaliningrad. However, as Harvath approaches, several Russian operatives spring from apparently out of nowhere, and subdue Harvath. As Harvath chastises himself for his sloppy work and endangering the mission, the other members of his team also suddenly appear, subduing the Russians and then quickly driving away with both Harvath and Tretyakov. Eventually the team makes its way to the forested parts of Kaliningrad, near to the lake and the Polish border, in part with the help of the Lithuanians, who send a produce truck as cover for the team to travel in. As the team moves on foot to the edge of the lake, they are found by Russian military forces, with the two sides exchanging heavy fire. Harvath and his side is about to run out of ammunition when the other half of his team comes across on the boat, taking Tretyakov and all the members of the team across to safety on the Polish side. Back in America, as Lydia Ryan and Harvath debrief the mission, it is revealed to the reader that the shipment of stolen American missiles was an elaborate fiction that had been concocted by Ryan in order to distract Artur Kopec, a known Russian sympathizer.

More summaries and resources for teaching or studying Spymaster.