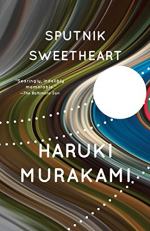 Related Topics
1Q84
A Wild Sheep Chase
Dance Dance Dance: A Novel
Hard-Boiled Wonderland and the End of the World
Haruki Murakami
Kafka on the Shore
Norwegian Wood
The Elephant Vanishes
The Wind-up Bird Chronicle
What I Talk About When I Talk About Running
Colorless Tsukuru Tazaki and His Years of Pilgrimage
UFO in Kushiro
Men Without Women: Stories
After Dark
Killing Commendatore
Super-Frog Saves Tokyo
First Person Singular

Haruki Murakami
This Study Guide consists of approximately 50 pages of chapter summaries, quotes, character analysis, themes, and more - everything you need to sharpen your knowledge of Sputnik Sweetheart.

The following version of this book was used to create this study guide: Murakami, Haruki. Sputnik Sweetheart. New York: Vintage, 2002.

The novel begins with a statement about the Sputnik satellites, which were launched by the Russians in 1957. Sputnik I orbited the Earth in 96 minutes. Sputnik II was launched with a dog, Laika, the first living being to go into space.

The narrator of Sputnik Sweetheart is a 25-year-old man living in Tokyo identified only by the initial K. K is in love with his best friend Sumire, who is 22 and has just dropped out of college to work on her creative writing. However, Sumire falls in love with a woman, Miu, whom she meets at a wedding. Miu is 39 and married. Sumire did not realize before meeting Miu that she was attracted to women; she thought she simply did not experience sexual desire. During their conversation at the wedding, Sumire mentioned that her favorite author was Jack Kerouac, and Miu asked, “Wasn't he a Sputnik?” (7), conflating the name of the Russian satellite with the term “Beatnik,” used to describe Kerouac and other writers of his generation. Because of this, Sumire often called Miu her “Sputnik Sweetheart” (8). Miu once studied to be a classical pianist, but she left her studies to take over her father's company when he passed away. She asks Sumire to be her personal assistant.

K and Sumire's friendship is defined by their mutual literary interests. K is an elementary school teacher, not a writer, but he loves to read. Sumire often calls him in the middle of the night from a phone booth to discuss her creative struggles. K tells Sumire about a ritual the Chinese used to conduct “A long time ago” (15) while building the gates attached to city walls. The gates were constructed with the bones of dead soldiers sealed inside and then consecrated with the blood of dogs whose throats were slit for the ritual. He said that writing a novel requires a similar “magical baptism” (16).

Sumire is K's only friend and he appreciates her because she helps him better understand himself. He longs for a romantic relationship with her. He dates other women, but only those who are married or otherwise attached. He is presently seeing the mother of one of his students.

Shortly after Sumire is hired as Miu's personal assistant, the two go on a business trip through Europe together. In a letter, Sumire tells K that they met an Englishman who invited them to visit his vacation cottage on a small Greek island and they have decided to go. Shortly after receiving the letter, K gets a phone call from Miu. She tells him that Sumire has disappeared and asks him to come to the island immediately.

K goes to the island and Miu tells him about how the vacation was unfolding pleasantly but the night before Sumire disappeared, she was behaving strangely. Miu woke in the middle of the night and found Sumire sitting on the floor of her bedroom in the cottage. She was sweating and gripping a washcloth between her teeth. Miu calmed Sumire and helped her into bed. Sumire told Miu how she felt about her and they began having a sexual encounter. Miu tells K that she was perfectly willing to have sex with Sumire but her body remained rigid and unresponsive. Sensing this resistance, Sumire stopped and returned to her own room. The next morning she was gone. In Sumire's room, K finds a disk containing two documents Sumire wrote before she vanished.

In the first document, Sumire wrote about her approach to creative writing and transcribed a dream she had. In this dream, Sumire walks up a staircase and finds a stone wall at the top with a hole in it. Peering through the hole, Sumire sees her mother, who passed away when she was three years old. As she tries to call out to her, Sumire's mother is sucked deeper into the hole, like it is a vacuum. Next, Sumire is standing atop a very tall building. She can see planes flying below her and she tries to call out for help but no one can hear her.

In the second document, Sumire transcribed a story Miu told her about a traumatic event that happened to her 14 years earlier. Miu was living in a small town in Switzerland that featured an amusement park. One night, Miu rode the Ferris wheel, intending to look through binoculars to try to see into her own apartment window. The Ferris wheel operator forgot about her and the amusement park closed, leaving Miu stuck at the top of the ride until morning. She looked through the binoculars and saw a man in her apartment that she knew from town. As she continued to watch, she saw herself enter the room. She watched in horror as her doppelganger made love with the man. When she was rescued the next day, her hair had turned completely white. She could never again experience sexual desire. She told Sumire that she believed another version of herself existed in another world and Sumire wrote that she wished to find access to this other world.

After reading the documents, K goes to sleep but he is awakened in the middle of the night by music playing in the distance. He follows the sound up into the mountains. When he reaches the top of a mountain, he experiences a terrible sensation, feeling as though he is no longer himself. It is profoundly upsetting. He wonders if Sumire heard this same music and followed it.

Sumire is never found. K returns to Tokyo to start the next school term. He receives a phone call from his girlfriend asking him to meet her at the supermarket. Her son, K's student, has been caught shoplifting. K talks to the boy, who is nicknamed Carrot, and tells him about Sumire's disappearance and his own lifelong loneliness. Carrot does not respond, but he seems to understand. K ends his relationship with Carrot's mother.

One night, K receives a phone call from Sumire. It is implied that this is a dream. She tells him she is calling from a phone booth and that she managed to “cut something's throat” (209). K is relieved to hear from her. He looks down at his own hands, expecting to see blood, but there is none.

More summaries and resources for teaching or studying Sputnik Sweetheart.