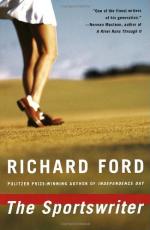 Ford writes realistically about late-twentieth-century American society and the alienation and inertia that many people feel. Frank Bascombe is not the only character in the novel to feel disconnected and disconsolate; he is simply the most obvious.

The importance of occupation in defining oneself is also a central idea in the novel. In a country where one's status and self-worth may be largely determined by what one does, Frank is constantly asking himself whether what he does is good enough, at the same time that his occupation shapes his entire worldview. Through Frank's occupation, Ford also comments on the importance that sport has come to assume in American society and the way it has become a metaphor for our lives.

The Sportswriter from BookRags. (c)2022 BookRags, Inc. All rights reserved.