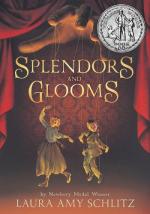 Laura Amy Schlitz
This Study Guide consists of approximately 32 pages of chapter summaries, quotes, character analysis, themes, and more - everything you need to sharpen your knowledge of Splendors and Glooms.

This detailed literature summary also contains Quotes and a Free Quiz on Splendors and Glooms by Laura Amy Schlitz.

Splendors and Glooms is a novel by writer Laura Amy Schlitz. In this novel, puppeteer Gaspare Grisini makes his living putting on puppet shows all over Europe with the help of his two wards, Lizzie Rose and Parsefall. Cassandra, Grisini’s former mentor, needs someone to steal away her source of magic before she dies a horrible death. For this reason, Grisini tells her about his wards and convinces her to use one of them to serve her purpose. Grisini hopes to use the child who steals the power to gain access to it himself. In the end, however, the children outsmart Grisini and Cassandra, as well as the source of power. Splendors and Glooms is a well-written novel of hope.

Clara is preparing to celebrate her twelfth birthday, but the day is overshadowed by the continuous mourning in her home five years after the deaths of her four siblings. One bright spot for Clara is that her father agreed to allow Grisini, a puppeteer, to perform at the party. Clara saw him once in the square and has been unable to forget his kind assistant, a girl a little older than Clara.

When the puppeteer arrives at the Wintermute home, he leaves his two wards, Lizzie Rose and Parsefall, to set up. Clara joins them and offers them the opportunity to share her tea. Lizzie Rose is polite and grateful, while Parsefall is indignant, bordering on rude. In fact, Parsefall cannot help himself and decides to steal a picture from the family.

During the puppet show, Clara shames her family by laughing at one of the performances, one of a dancing skeleton. This results in her being sent to bed early. Clara runs into Grisini on her way upstairs and he gives her an automaton watch for kindly helping him find the lost item.

A few days later, Lizzie Rose and Parsefall learn that Clara has gone missing. After the police visit, Lizzie Rose learns there have been two other incidents in which Grisini was accused of involvement with a missing child. For this reason, Lizzie Rose goes to the police with her information. When Grisini learns of this, he attacks Lizzie Rose, only to fall down the stairs while chasing her out of the room. Grisini disappears soon after, leaving Lizzie Rose and Parsefall to assume he is dead. It is shortly after this that they find a puppet that looks exactly like Clara among Grisini’s belongings.

Unbeknownst to the children, Grisini has gone to the distant home of his former mentor, Cassandra. Cassandra is dying, and she believes that she will die a fiery death because of a cursed stone that is the source of her magical powers. For this reason, Cassandra has summoned Grisini to her in hopes that he might help her find a way to stop the stone from killing her. Grisini tells Cassandra the stone must be stolen by a child. Grisini suggests that Cassandra should write to his wards and have them come to her. He reasons that by their very nature the children will steal the stone.

Lizzie Rose convinces Parsefall they should travel to Cassandra’s home after a run in with Clara’s father leaves her convinced that the police will soon be looking for Parsefall because of the theft of the picture from the Wintermute home. When they arrive, Lizzie Rose feels unwelcome by the servants even as Cassandra repeatedly promises the children that she plans to leave all her possessions and wealth to them. Parsefall, as well, feels uncomfortable, but not because of the servants or Cassandra. Parsefall has had a run in with Grisini who has instructed him to steal the stone. Parsefall is frightened for his life.

Parsefall tries to steal the stone, but Cassandra catches him and stops him. Later, Cassandra uses the stone to remind Parsefall of the horrible things Grisini has done to him in the past. This again makes Parsefall determined to steal the stone. However, Clara, trapped as a puppet, has fallen in love with Parsefall and she uses this passion to return to her human form and steal the stone instead. Clara runs the stone out to the frozen lake as Grisini pursues her and crushes it. Grisini falls through the ice, but Lizzie Rose and Parsefall save Clara.

More summaries and resources for teaching or studying Splendors and Glooms.