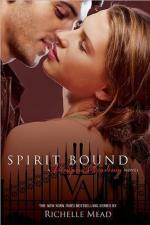 Richelle Mead
This Study Guide consists of approximately 54 pages of chapter summaries, quotes, character analysis, themes, and more - everything you need to sharpen your knowledge of Spirit Bound.

This detailed literature summary also contains Topics for Discussion and a Free Quiz on Spirit Bound by Richelle Mead.

Rose Hathaway is a half-vampire, half-human species of humanity known as a Dhampir. As part of a complex part of a secret, hidden society of vampires who co-exist with humans unbeknownst to the latter, Rose trains to become a Royal Moroi Guardian. Guardians are body guards highly-skilled in martial arts and other mystical techniques such as fire-casting and mental control. Their sacred mission for centuries unbroken has been to protect the fragile, pacifist Moroi vampires who form the upper class in hidden vampire society. In turn, the Moroi rule over a society that equally protects the interests of the Dhampir class, who are dependent on the Moroi in order to sustain their existence.

While the Moroi are vampires, they do not prey on humans. Instead, they seek willing volunteers who allow them to feed on their blood supply in exchange for the endorphin high humans receive when they are bled by vampires. But the evil Strigoi class of vampires are not so kind. They kill humans for blood, turn peaceful Dhampirs into Strigoi murderers, and seek to destroy the formidable St. Vladimir's Academy, where both the Dhampir and Moroi send their young to be instructed in the art of survival.

Rose has made a name for herself as a promising young Guardian, but her troubled nature as a natural rebel have equally made her enemies. She graduates at long last from St. Vladimir's as an accomplished young Guardian, but it unable to forget Dimitri, her former teacher and first love who was turned from Dhampir into a Strigoi. Rose has heard that it is possible to turn a Strigoi back into a Dhampir, but no one believes her. She leads a covert mission to bust Victor, a traitorous Moroi, free from prison because Victor's brother has knowledge of how to turn a Strigoi back to Dhampir.

The prison bust is successful, but Victor and his brother escape in an ensuing Strigoi attack lead by Dimitri himself. Lissa, a Moroi princess and the last surviving Dagomir royalty in Moroi society, believes she can use the knowledge they've gained to create a charmed stake that will pierce a Strigoi's heart and revert him back to his former self. Rose and Lissa plot to master a way to revert Strigoi using the new ideas but Dimitri attacks yet again, capturing Lissa and Lissa's estranged boyfriend and guardian Christian. Rose leads a rescue task force that liberates her held friends and captures Dimitri. Lissa transforms Dimitri back into Dhampir, but he is so guilt-ridden over his Strigoi past that he cannot accept Rose's love.

Rose is held for trial when Queen Tatiana, the leader of the Moroi society and the nemesis to Rose's efforts to modernize the fighting force of the Royal Court Guardians, is found dead with a silver stake in her heart. A pre-trial hearing reveals to the entire vampire society that Rose's stake was the murder weapon and that the Moroi Royals intend to have her tried for treason and executed for her crimes.

More summaries and resources for teaching or studying Spirit Bound.