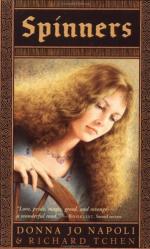 Donna Jo Napoli
This Study Guide consists of approximately 23 pages of chapter summaries, quotes, character analysis, themes, and more - everything you need to sharpen your knowledge of Spinners.

Chapter 29. After the birth of her daughter, Saskia tries to convince herself that the tailor will not show up to take her child. Unfortunately, the tailor does show up. Saskia tries to bribe him, but he refuses to be bribed. Instead, the tailor offers to give Saskia three chances to figure out his true name, the name Saskia's mother called him before her death.

Chapter 30. On the first night, Saskia goes through every name of the villagers she can think of, but none of them are the tailor's name. The tailor laughs, convinced she will never figure out his name.

Chapter 31. On the second night, Saskia goes through every foreign name she can think of. When the tailor leaves, Saskia cannot stop thinking of him, or the fact that he called her daughter. Saskia calls for the...

More summaries and resources for teaching or studying Spinners.