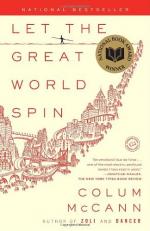 Robert Charles Wilson
This Study Guide consists of approximately 47 pages of chapter summaries, quotes, character analysis, themes, and more - everything you need to sharpen your knowledge of Spin.

This detailed literature summary also contains Topics for Discussion and a Free Quiz on Spin by Robert Charles Wilson.

Spin is an award-winning science-fiction novel published in 2005 by American author Robert Charles Wilson. Spin starts as the narrator, Tyler Dupree, recounts a night of October when he and his two close teenage friends witness the disappearance of the moon and the stars from the night's sky. Earth is enclosed in an artificial bubble that slows down time. While the rest of the universe ages at a very high speed and the sun decays into an uncontrolled ball of radiating fire, the people on earth try to cope with the seemingly unavoidable catastrophe. Spin is the story of the life of three friends, spanning the three decades of the Spin, as humans try to make sense of this incredible event.

From his hotel room in Indonesia, Tyler Dupree recalls the night in October when three young teenagers witnessed the disappearance of the stars from the night's sky. The youngsters soon learn that their planet has been wrapped in an energy field of alien origin and nicknamed the "Spin". Satellites are suddenly obsolete, time is more relative than ever and the end of the world is closer than everyone thought.

As life on earth remains unaffected by the Spin, the initial reaction to the Spin is minimal. Tyler and his two friends grow up their separate ways. Jason dedicates his life to learning about the Spin phenomenon. His twin sister Diane gets lost in the various religious movements that derived from the Spin. Finally, Tyler studies to become a doctor. Tyler has been in love with Diane from a very young age but their relationship remains mostly platonic.

Through his industrial business, Jason's father gains political influence and builds Perihelion, a foundation dedicated to researching the Spin and advising the government on related matters. Jason becomes the public voice of Perihelion and hires Tyler as the in-house practitioner. Humans send capsules of Earth seeds to Mars to build a biosphere on the red planet. Mars is then colonized by volunteers and a Martian civilization erupts. Soon a Spin wraps around Mars, stopping further development. However, a Martian ambassador lands on Earth, bringing along some technological marvel from the Martian civilization, but no coherent information about the Aliens that built the Spin. Tyler befriends the ambassador and uses a Martin drug on Jason to save him from the ravages of Multiple Sclerosis.

During this time, Diane keeps her distance, settles down and marries Simon Townsend, a religious sect leader. Tyler's mother Belinda dies. Simon calls Tyler and informs him that Diane has become sick from a cattle-born disease named CVWS. The disease is related to the genetic manipulations performed by some religious cults. The Spin appears to be taken down and the heat from the decayed Sun threatens the planet. Tyler picks up Simon and Diane and drives to the twin's house. Jason is already in the house, dying from a different version of the drug. Tyler injects Diane with the original Martian drug to save her and learns the truth about the Aliens from Jason, who dies just as the Spin barrier is raised once again. Diane recovers, divorces Simon and flees with Tyler to Canada and then to Indonesia. Tyler takes the Martian drug to level with Diane and they both flee across the bridge built by the Aliens to a new and promising planet.

More summaries and resources for teaching or studying Spin.