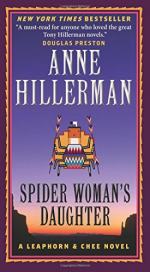 Related Topics
Song of the Lion

Anne Hillerman
This Study Guide consists of approximately 41 pages of chapter summaries, quotes, character analysis, themes, and more - everything you need to sharpen your knowledge of Spider Woman's Daughter.

Spider Woman’s Daughter, by Toni Hillerman, is the 19th book in the Navajo Mysteries series. The story focuses largely on Navajo officers Bernadette “Bernie” Manuelito and her husband, Jim Chee, who are trying to solve the mystery of who shot their mentor, retired police detective Joe Leaphorn. Leaphorn is shot shortly after a meeting with the police. Bernie witnesses the shooting, but she is unable to get to Leaphorn in time to stop the assailant. She’s wracked with guilt over her failure and is determined to solve the crime, even though she is specifically told not to handle the case.

The case officially goes to Chee, who considered Leaphorn a mentor. Chee and Bernie end up tackling the case together, discovering that Leaphorn was afraid of someone from his past. They try to learn more from his possible girlfriend and roommate, Louisa, but she’s nowhere to be found. All they know is that she left an angry message on Leaphorn’s answering machine, but they don’t know what the fight was about.

Bernie discovers that Leaphorn had been working as a private consultant for the American Indian Resource Center (AIRC). They had recently received a donation of several rare and valuable Native American pots. Leaphorn was hired to make sure that all of the insurance information about the Native pottery was correct and each piece was accurately appraised. Bernie keeps digging and discovers that the initial report Leaphorn sent was never received by Dr. John Collingsworth, who is in charge at AIRC. Bernie agrees to help Dr. Collingsworth with the report, believing that it will lead to more details about Leaphorn’s shooting.

Bernie is also dealing with troubles at home. Her sister is acting out and has started to drink, leaving their mother alone at home with no one to take care of her. Also, Bernie's relationship with her husband is starting to suffer because of the case. They hardly get to see one another, and Chee is jealous of an FBI agent who is also working the case, someone who clearly has feelings for Bernie.

After following several dead ends, Bernie finally gets a lead. She finds the original report which details that the pots were appraised at an incredibly low price, something which doesn’t add up with how rare they’re supposed to be. Bernie tries to find the appraiser, Ellie Friedman, but she doesn’t have any luck. Chee and Bernie eventually stumble upon the appraiser's body in the Chaco ruins.

With more leads to follow up on, Chee and Bernie discover that Ellie was working with Dr. Maxie Davis. Dr. Davis hated Leaphorn because he had gone after her husband in a previous case. In the end, her husband died, and she placed the blame on Leaphorn. Dr. Davis was also working with Ellie. They didn’t want the pots to be taken away from Navajo land, so Ellie would make convincing fakes and keep the actual artifacts. Dr. Davis killed Ellie and intended to frame her for Leaphorn’s murder; trying to make it look like Ellie committed suicide from the guilt of Leaphorn's death.

Chee tries to stop Davis, but he gets kidnapped in the process. Bernie is able to track both of them down. Davis is about to destroy Ellie’s storage unit which contains evidence of their past crimes. Bernie is able to stop the explosion and save her husband. The police track down Dr. Davis and arrest her. The book ends with Leaphorn slowly starting to recover from his injuries and Bernie being awarded the Leaphorn Award of Valor for her actions during the case.