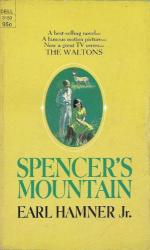 Earl Hamner Jr.
This Study Guide consists of approximately 25 pages of chapter summaries, quotes, character analysis, themes, and more - everything you need to sharpen your knowledge of Spencer's Mountain.

Spencer's Mountain is a novel by writer Earl Hamner, Jr. In this novel, Clay-Boy Spencer has finally reached an age at which he is allowed to go hunting with his father and eight uncles. It is a moment of great change in Clay-Boy's life as he kills the mythical white buck that his grandfather has spent his whole life telling stories about. Therefore, when Clay-Boy gets the chance to go to college to make his life better than his parents', it seems to be fate. However, it takes great sacrifice for a poor family to send their eldest child to college. Spencer's Mountain is a wonderful novel of family, of love, of hope. This novel will continue to inspire readers even more than fifty years after its publication.

Clay-Boy is excited as each of his uncles arrives at his family's home for the Thanksgiving holiday. Clay-Boy is especially happy to see his favorite uncle, Virgil, who lives in Richmond. As the evening unfolds, Clay-Boy listens to stories of hunting and other family glories, hoping that he might be able to sneak past his mother in the morning to join his father and uncles in their annual hunting trip. The following morning, Clay-Boy ignores his mother's call as he slips out of the house and joins his uncles on Spencer Mountain. Left alone, Clay-Boy thinks about his grandfather's stories of hunting. Then a white buck, straight out of those stories, appears in the woods in front of Clay-Boy. Acting on instinct, Clay-Boy kills the buck, bringing home to his family meat that will satisfy them for months.

A harsh winter unfolds in the mountain community following Clay-Boy's dramatic first kill. In the spring, Clay-Boy turns his attentions toward his final months of school. Clay-Boy, at fifteen, will be the first of the Spencers to graduate from high school. As the weather changes, Clay begins to once again work on the house he has dreamed of building on his small section of Spencer Mountain for more that sixteen years. Clay-Boy goes with him on this first day and helps him shore up the foundation he has dug time and time again. Clay-Boy knows, as his mother also understands, that this house is a dream that will never be fulfilled.

Shortly before Clay-Boy's graduation, his teacher, Miss Parker, and the Baptist preacher, Mr. Goodson, come to the Spencer house and inform Olivia that her son is smart enough to go to college. Miss Parker says that Mr. Goodson has found a scholarship for which Clay-Boy might be eligible, but it would require him to become a Baptist minister. Olivia insists they not tell Clay this when they inform him of Clay-Boy's chances of attending school since Clay dislikes the Baptists. When Clay arrives, he agrees quickly to sign the application for Clay-Boy's scholarship.

While waiting for graduation, Clay-Boy begins looking for a job. Since his father refuses to allow Clay-Boy to work at the same soapstone mine where he works, along with everyone else in town, Clay-Boy has to look elsewhere for work. Clay-Boy goes to Miss Parker with the suggestion of opening a library in town. Miss Parker immediately jumps at the idea, reaching out to her many friends for books. Miss Parker even goes to the Company and gets them to pay Clay-Boy a salary.

As the summer passes, Clay-Boy finds himself involved in a love affair with a demanding, controlling young lady who has been his friend for many years. This love affair progresses quickly, leaving Clay-Boy unsure about his future. At the same time, Clay-Boy learns that his scholarship has been denied, leaving him without the hope of college. However, Clay refuses to take no for an answer and he goes to the Dean of the university to learn exactly what Clay-Boy has to do to get in. The Dean instructs Clay to have Clay-Boy learn the equivalent of a semester of Latin and he will be accepted, but he will not be eligible for a scholarship until the following school year. Clay-Boy learns the Latin, but Clay is left with finding a means to pay the tuition. In the end, Clay sells his small parcel of land on top of Spencer's Mountain.

More summaries and resources for teaching or studying Spencer's Mountain.