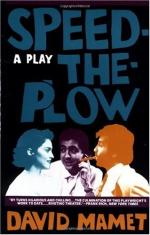 Act 3 is set in Gould's office the next morning. As it opens, Gould is sitting behind his desk and Fox enters. Fox says that he was up all night. He had been thinking, on the one hand, whether he was worthy to be rich. On the other hand, he felt greedy.

Fox asks Gould if their discussion yesterday about producer status on the new film meant that they would "share" the above-the-title position. He also feels this is only the beginning, because they can bring more.

Gould replies that he isn't going to do the Douglas Brown film. Fox replies that he doesn't blame him, because it's bad. If he were Gould, he'd do the film on Radiation. Then, he'd spend the rest of his life in a packing crate. Fox says he can't get over the people who waste filmmakers' time. If...

(read more from the Act 3 Summary)