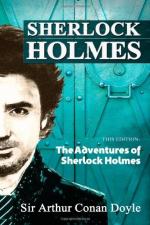 The Adventure of the Speckled Band Summary & Study Guide

Arthur Conan Doyle
This Study Guide consists of approximately 43 pages of chapter summaries, quotes, character analysis, themes, and more - everything you need to sharpen your knowledge of The Adventure of the Speckled Band.

The Adventure of the Speckled Band Summary & Study Guide Description

The Adventure of the Speckled Band Summary & Study Guide includes comprehensive information and analysis to help you understand the book. This study guide contains the following sections:

This detailed literature summary also contains Related Titles and a Free Quiz on The Adventure of the Speckled Band by Arthur Conan Doyle.

In "The Adventure of the Speckled Band" Arthur Conan Doyle presents, for the reader's consideration, one of the most unusual cases in the long, illustrious career of Sherlock Holmes. The narrator, Holmes' friend and right hand man, Dr. Watson, fills us in on Holmes' legendary detective abilities, for the benefit of those readers who have not yet heard of the famous sleuth.

This case is brought to Holmes' attention by a distraught young woman named Helen Stoner. Miss Stoner seeks out Holmes in the early hours of the morning on a fine spring day in 1883. In her urgency, she wakes up the entire household because she must speak to Holmes right away. Holmes and the faithful Watson, always eager to hear an interesting mystery, invite her to share her problem.

Helen Stoner recounts for them the sad story of her life. Her mother, killed eight years ago, left Helen and her twin sister with a healthy inheritance and a violent stepfather. The stepfather, Dr. Grimesby Roylott, comes from a noble but tragic bloodline. The Roylott family wealth has been squandered over time by the reckless and violent male heirs of the Roylott line. Since the death of Helen's mother, Dr. Roylott has been content to live off his dead wife's income. He indulges his violent nature frequently with his stepdaughters and with the surrounding villagers, who all fear the dreaded Roylott. His only friends are a band of gypsies who frequent Roylott's family home at Stoke Moran, as well as a cheetah and a baboon that are allowed to roam freely over the grounds.

The animals are imported from India, where Roylott had a medical practice for many years. Helen confides that back in India, Roylott killed their butler over a stolen property dispute and spent quite some time in prison for it. Nowadays he continues to cause trouble and terrorize the neighbors with his violence. Helen has wasted considerable money paying off the villagers after each one of these incidents. Helen appeals to Holmes to help her because she fears her stepfather is plotting against her life. However, she has absolutely no proof, and even her fiancé thinks her fears are groundless.

Helen fears for her life because her twin sister, Julia, died mysteriously two years ago at the family home in Stoke Moran some two weeks before her wedding. Helen's wedding date is now approaching, and as she relates the story of Julia's death, we see similarities to Helen's current situation. On the night she died, Julia mentioned to Helen that for the past several nights, she'd been woken by the sound of a low whistle in the dead of night. The same night she told Helen about the whistle, Julia died mysteriously in her locked room. Julia's last words referred to a "speckled band." Helen believes she died of fright but cannot imagine what frightened her sister so.

Helen's current agitation stems from the fact that her stepfather has begun repairs on Helen's bedroom, which has forced Helen to move into her dead sister's bedroom until the repairs are completed. Helen insists to Holmes that her room was never in need of repair at all and believes it's a ploy to move her into Julia's room. Finally, late last night while Helen was lying in bed, she heard it - the sound of a low whistle in the dead of night. Helen came straightaway to see Holmes and hire him to assist her. She explains to Holmes that she cannot pay him until after her wedding. She gets control of her inheritance only when she marries; until then it is in her stepfather's hands.

Holmes, always the gentleman, puts her mind at ease about his fee and agrees to meet her at Stoke Moran later that afternoon. Relieved, Helen leaves, and Holmes discusses the case with Watson. Holmes' initial theory is that Roylott has hired a gypsy friend to break into the bedroom and in some way cause his stepdaughters' deaths. Just then Roylott bursts through the door. He threatens Holmes by bending a steel poker in half. Roylott admits to having followed Helen there this morning and tells Holmes to stay out of his business. Holmes laughs off the encounter and bends the steel poker back in place.

Holmes goes off to research his theory that morning; in the process he reviews Helen's mother's will. Holmes and Watson travel through the English countryside, first by train and then by carriage to reach Roylott's house. During the trip, Holmes tells Watson that the provisions of the will give Roylott a very good motive for murder indeed. When they arrive at Stokes Moran, Helen shows them the rooms where she and Dr. Roylott sleep. Holmes exams the shuttered bars on the windows and immediately realizes his gypsy theory is wrong; the windows are impassable. Inside Julia's old room, he finds a fake bell-pull next to the bed attached to a tiny ventilator shaft which leads, not to the outside air, but straight to Dr. Roylott's bedroom next door. In Dr. Roylott's bedroom they find a saucer of milk standing on top of a safe and a tiny dog leash looped into a noose. Holmes has seen enough, but he needs to prove his theory. He gives Helen some instructions, then he and Watson high-tail it out of there before Roylott gets back.

Holmes and Watson keep watch from an inn across the way that has a clear view of the house. They watch as Roylott returns, and they are still watching several hours later as Helen gives the all-clear signal. They steal up to the house, seen by no one but the baboon, and enter through the window to Julia's bedroom, which Helen has left open. They seal themselves inside with a gun, a cane, and a candle, but no lamp because Roylott would see the light glow through the ventilator. Holmes warns Watson not to make a sound, and the men wait in silence.

Hours later, they see light through the ventilator shaft and then hear a soft hissing. Holmes lights the candle and attacks the bell-rope with his cane. They hear a low whistle from the next room. Watson can only watch helplessly; he has no idea what's going on. Suddenly, they hear a blood-curdling scream come from Dr. Roylott's room. Rushing to his room, they find him dead, in his chair, with a speckled bandana on his head. The head band moves, it hisses at them. Holmes warns Watson that the speckled band is a swamp adder from India, and that its venom kills in ten seconds. Holmes slips the noosed dog leash around the snake and throws it back into the open safe.

The next day, he and Watson see Helen safely off to her aunt's house to continue her life and her wedding plans. The coroner's inquiry officially lists Roylott's death as an accident; he was careless with his tropical pet. Holmes explains, for Watson's benefit, the scientific method which led him to suspect the murder weapon was a swamp adder, and he fills in all the details we might have missed about Dr. Roylott's wicked plan. As usual with a Sherlock Holmes story, the villain is apparent from the beginning. The pleasure in reading Conan Doyle's work comes from following Holmes as he unravels the puzzle. Through Watson's eyes, the reader is able to get inside the mind of the great Holmes and to learn to think like a master detective.

More summaries and resources for teaching or studying The Adventure of the Speckled Band.

The Adventure of the Speckled Band from BookRags. (c)2022 BookRags, Inc. All rights reserved.