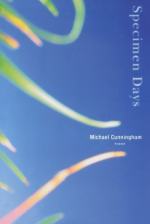 Related Topics
Michael Cunningham
The Hours
The Snow Queen
A Wild Swan: And Other Tales

Michael Cunningham
This Study Guide consists of approximately 37 pages of chapter summaries, quotes, character analysis, themes, and more - everything you need to sharpen your knowledge of Specimen Days.

The following version of this book was used to create this study guide: Cunningham, Michael. Specimen Days. New York: Farrar, Straus and Giroux, 2005.

Specimen Days by Michael Cunningham is a novel consisting of three distinct stories set in New York City across multiple eras. The first story, In the Machine, takes place in New York City in the mid-to-late-1800s. Lucas is a 12-year-old boy with a partially deformed body. He suffers from fits in which he involuntarily quotes from his favorite book, Leaves of Grass by Walt Whitman. After Lucas’ older brother Simon is crushed to death by a machine in a factory, Lucas takes over Simon’s job at the factory to help support himself and his parents. Lucas also maintains a friendship with Catherine Fitzhugh, to whom Simon had been engaged to be married.

Lucas’ mother soon claims that she can hear Simon’s voice emanating from the music box she owns. Soon after, Lucas finds that he can hear Simon’s voice emanating from the machine that crushed Simon to death. Lucas concludes that Simon’s spirit must be trapped in the world of machines. Lucas worries that Simon will use machines to kill Catherine so that Simon and Catherine’s spirits will be united. Lucas tries to warn Catherine but she does not believe him. Lucas intentionally crushes his hand in a machine at work so that Catherine will accompany him to the hospital instead of going to the garment factory where she works. The garment factory burns down the next day, killing many workers. However, Catherine’s life is spared because she was with Lucas at the hospital.

The second story in the novel is entitled The Children’s Crusade. It is set in New York City a few years after the terrorist attacks of September 11, 2001. Cat Martin works for the police’s terrorism deterrence department. Whenever someone calls the police to make a terrorist threat, the call is routed to Cat so that she can try to extract pertinent information. One day, she receives a call from a boy threatening to commit a murder. A few days later, the boy uses a bomb to kill himself and a civilian. The police can find no connection between the bomber and the civilian. Soon after, Cat receives a call from a boy who claims to be the first boy’s younger brother. He also appears poised to carry out a terrorist attack. On the phone, the boy quotes a line of poetry by Walt Whitman.

The boy discovers where Cat lives and writes a threatening line of Whitman poetry on her apartment door. Cat goes to stay with her boyfriend Simon. She later meets with a Walt Whitman scholar who speaks of Whitman’s philosophy of the beauty of all aspects of life. Soon, a woman arrives at a police station and says that she is the one who has been organizing the terrorist attacks. She calls herself Walt Whitman, and she says that her goal is to help revert society to a supposedly better and more natural state. The next time that Cat goes to her apartment, the nameless boy is waiting for her with a bomb. She takes the bomb from him but does not wish to bring him to the police. She flees the city with the boy. The boy begins to call himself Luke. The boy soon reveals another bomb in his possession, and he says that he will kill himself and Cat once he truly loves her.

The third story of the novel is entitled Like Beauty, and it takes place at an unspecified point in the distant future. The story opens in New York City, which is ruled by an autocratic council. The story follows Simon, an artificially constructed form of human called a simulo. Simulos have been outlawed, so Simon decides to leave New York City. He becomes allied with Catareen, an alien from the planet Nadia. Many Nadians have immigrated to Earth in previous years. Simon confesses to Catareen that his greatest desire is to be able to feel true emotions like humans. They decide to travel towards Denver, Colorado, as that is where Emory Loweel, Simon’s creator, is said to live.

Along the way, a devoutly religious boy named Luke joins them. The three of them grow closer during their travels, especially Simon and Catareen. Simon seems to sense a distinct type of beauty in Catareen, and Simon seems to gain a deeper potential for feeling actual emotions. When the trio arrives in Denver, they find Emory Lowell. Lowell has built a spaceship to convey himself and his compatriots away from Earth and to a newly discovered planet, as Earth appears to be in a state of steady decline. Lowell invites Simon, Catareen, and Luke to join the voyage. Luke accepts the invitation, but Catareen begins to die of old age. Simon waits with her while she dies and the spaceship leaves without him.

More summaries and resources for teaching or studying Specimen Days.