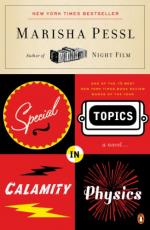 Marisha Pessl
This Study Guide consists of approximately 23 pages of chapter summaries, quotes, character analysis, themes, and more - everything you need to sharpen your knowledge of Special Topics in Calamity Physics.

Marisha Pessl's debut novel, Special Topics in Calamity Physics, focuses around one year in the life of the protagonist and narrator, Blue Van Meer. She is named after the Cassius Blue butterfly, which her mother loved to catch. Blue and her father, Gareth, a political science professor, move around the country every few months after the death of Natasha, Blue's mother and Gareth's wife. A successful book and Gareth's work as a visiting professor enable the traveling. Blue is happy that the entirety of her senior year in high school will be spent in Stockton, North Carolina. Blue will be attending the culturally-focused Saint Gallway School.

In Stockton, Blue meets and befriends a woman named Hannah Schneider, who teaches film at the school. Hannah is friends and socializes with a group of elitist students, known as the Bluebloods. Hannah brings Blue into this group, which accepts Blue over time. Blue and the members of the Bluebloods are all curious about Hannah, who never reveals much of her own past.

In late March, Hannah organizes a camping trip in the mountains. Two of the Bluebloods, Leulah and Jade, believe they are being followed. That night, Blue finds Hannah Schneider dead, hanging from a tree. While the police write off Hannah's death as a suicide, Blue isn't convinced. She goes through Hannah's house and her possessions, and does research into an acquaintance of Hannah's, Smoke Harvey, who died at a party Hannah hosted before she died. Ada Harvey, Smoke's daughter, reveals that Smoke was an investigative journalist who was attempting to bring a group of left wing radicals to justice following the murder of Smoke's uncle, a U.S. senator. Hannah Schneider is actually Catherine Baker, a liberal-socialist radical. Blue theorizes that Hannah was attempting to stage a disappearance during the camping trip, but may have accidentally killed herself in the process.

Blue reveals all of this information to her father, who agrees to go to the police with her. But the next morning, Gareth is gone, along with all of his clothes. Blue discovers that Gareth was a member of the same left wing group as Hannah. Blue tells her father's colleagues at college that he is in Europe due to his mother taking ill, and that he himself is suffering from cancer. Blue goes on with her life, her eyes set on the Ivy League, and financed by a trust fund her father set up for her years before.

More summaries and resources for teaching or studying Special Topics in Calamity Physics.