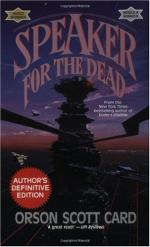 Orson Scott Card
This Study Guide consists of approximately 41 pages of chapter summaries, quotes, character analysis, themes, and more - everything you need to sharpen your knowledge of Speaker for the Dead.

Speaker for the Dead Summary & Study Guide includes comprehensive information and analysis to help you understand the book. This study guide contains the following sections:

This detailed literature summary also contains Topics for Discussion and a Free Quiz on Speaker for the Dead by Orson Scott Card.

Speaker for the Dead is the sequel to Orson Scott Card's sci-fi adventure, Ender's Game. Speaker for the Dead takes place several thousand years after the extermination of the alien race, the buggers. A new alien race has been discovered on a newly populated planet, Luisitania. The members of the Luisitania colony have been given permission to study this new race, but are forbidden to influence the evolution of the alien race. However, the true trouble begins after one of those trusted to study the new aliens is found murdered in a disturbing way. Ender himself learns of the murder and comes to the planet to investigate, revealing not only the truth about the alien race, but also revealing some hard to accept truths about the colonists who reside on the planet. Speaker for the Dead is a novel of sin and redemption that will please sci-fi and mainstream fans alike.

Pipo is one of the xenologers who has the great honor of studying the porquinhos, or piggies, who reside on the planet Luisitania. Pipo is a good xenologer who struggles with the rules imposed on him by the Starways Congress to refrain from influencing the development of the piggy civilization. Pipo learns all he can from the alien race through observation, which is painfully little. Pipo works with his son, Libo, and a girl from the village who has taken the tests to become a xenobiologist at an early age. When this girl, Novinha discovers in her work that the same disease that killed her parents within days of their having found a cure still exists within the planet, Pipo becomes excited and rushes out to visit with the piggies. However, Pipo does not come back and Novinha and Libo later find him murdered in a most disturbing way.

Convinced that the knowledge she learned killed Pipo, Novinha hides away her work and refuses to show it to anyone, including Libo for whom she has come to care for. Novinha calls for a speaker for the dead hoping he can help her to discover the true reason for Pipo's murder. It is through this call that Ender, who has already learned of Pipo's death, decides to go to the distant planet and do some investigating of his own. Ender, who is responsible for the death of the alien race the buggers many years before, has been searching for a planet where he could release the hive queen of the buggers whom he saved all those years ago. Ender believes this planet might be the ideal place.

In learning the truth of the paternity of Novinha's children, Ender learns that the reason Novinha could not marry Libo was because of the secret she showed Pipo shortly before his death and hid from Libo to prevent his own death. If Novinha had married Libo, he would have had the right to see her research and she feared this knowledge would have killed him as well. Ender investigates the piggies to not only learn about them for the sake of the hive queen, but to learn why Pipo and Libo died. Ender quickly realizes that the piggies did not think they were murdering Pipo and Libo, but honoring them with what they called the third life.

During Ender's investigations, the secret that the xenologers have been aiding the evolution of the piggies, becomes known by the Starways Congress and the colony is ordered to evacuate. Ender convinces the colonists to rebel against the Congress and to allow him to facilitate a contract between them and the piggies in order for them to all live in peace together. With this contract agreed to and signed, Ender releases the hive queen and marries Novinha, finally making a home for himself on the planet of Lusitania.

More summaries and resources for teaching or studying Speaker for the Dead.

Speaker for the Dead from BookRags. (c)2022 BookRags, Inc. All rights reserved.